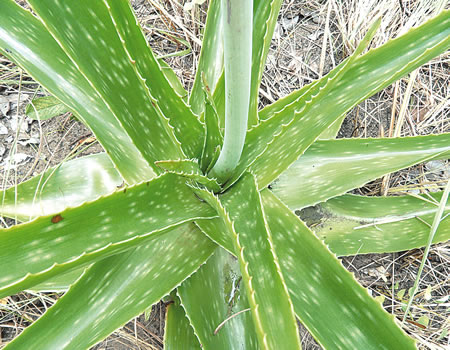 WITH type 2 diabetes, the body can’t regulate blood sugar levels on its own, and people with the health condition must rely on diet changes, exercise, stress management, and sometimes oral medications and insulin, according to the American Diabetes Association (ADA).

Some people complement their treatment plan with natural approaches, such as aloe vera capsules.

“I’m a diabetic myself, and if I can take one fewer pill, I’m all for it,” says Shirley Winslett, a registered dietitian nutritionist at the Owatanna Hospital in Owatanna, Minnesota, who specialises in diabetes.

Aloe vera, a succulent plant commonly found in warm countries (its origin is thought to be Sudan), has been used in traditional medicine for more than 2,000 years, according to a review published January 2015 in the Journal of Traditional and Complementary Medicine.

A powerful anti-inflammatory, aloe vera has been used to treat a variety of health complaints, including constipation, colic, and high blood pressure, though you’re most likely familiar with it as a treatment for sunburns.

In fact, aloe vera was officially listed as a skin protectant in the first written collection of known formulas for common drugs in 1820 (known as the U.S. Pharmacopoeia), according to the book Herbal Medicine: Biomolecular and Clinical Aspects.

There are two substances from aloe vera that are used in health products: a clear gel that’s commonly applied to the skin to relieve burns and psoriasis, and a yellow latex that can be taken by mouth as a remedy for constipation, according to the Mayo Clinic.

The gel can also be taken by mouth in supplement form to treat other conditions, including osteoarthritis, bowel diseases, and fever, according to the National Centre for Complementary and Integrative Health (NCCIH).

According to Herbal Medicine, aloe vera contains more than 200 active substances, including vitamins, minerals, enzymes and polysaccharides (a natural form of carbohydrates).

“There is some data that suggests that aloe vera may help lower blood glucose levels,” says Vandana Sheth, RDN, CDE, a national spokesperson for the American Academy of Nutrition and Dietetics and the author of My Indian Table.

For example, a review published in June 2016 in the Journal of Alternative and Complementary Medicine cites research that suggests oral aloe vera supplements can lower fasting blood sugar by 46.6 milligrammes per decilitre (mg/dL) and A1C blood levels by 1.05 per cent.

Fasting blood sugar and A1C measurements are used to diagnose diabetes, according to the Mayo Clinic, and A1C is typically used to tell how well blood sugar levels are being managed on average over a three month period, says the National Institute of Diabetes and Digestive and Kidney Diseases (NIDDK).

Similarly, a study published in Planta Medica found that 30 participants with type 2 diabetes who took a 300 mg aloe vera gel capsule once every 12 hours for two months saw significant health improvements. Compared with the placebo group, the aloe vera group dropped their fasting blood sugar levels by an average of 4.8, their A1C blood levels by 8.07 percent, total cholesterol by 8.35 percent, and low-density lipoprotein cholesterol (LDL, also known as “bad” cholesterol) by 4.48 percent.

Why might aloe vera help treat type 2 diabetes? According to the authors of a review published in February 2016 in the Journal of Clinical Pharmacy and Therapeutics, aloe vera supplements may lower the absorption of sugar into the gastrointestinal tract following a meal, stimulate the breakdown of sugar, and prevent sugar production.

Unfortunately, aloe vera isn’t a risk-free solution for lowering blood sugar in people with type 2 diabetes. In fact, the blood-sugar-lowering effects of aloe vera can come with other consequences.

According to the NCCIH, people with type 2 diabetes who use medications to lower blood sugar should be careful about taking aloe vera orally. If you combine the two, you can send your blood sugar levels crashing (a serious condition known as hypoglycemia), notes the Mayo Clinic.

“If you’re taking any medication that lowers your blood sugar significantly, adding in aloe vera may cause hypoglycemia, which is just as bad as hyperglycemia, if not worse,” Winslett says. When blood sugar levels get too low, you may feel fatigued, shaky, and sweaty, and develop an irregular heart rhythm. When hypoglycemia worsens, you may experience confusion, blurred vision, seizures, or even loss of consciousness.

Why irregular sleep patterns may affect your heart health

And because aloe vera has been shown to have laxative effects, it may lower the absorption — and therefore the effectiveness — of other oral medications, says the NCCIH.

If you’re interested in adding an aloe vera supplement to your diabetes treatment plan, it’s best to talk to your doctor first. But even if your doctor gives you the all-clear, proceed with caution. Monitor your blood sugar closely to avoid low blood sugar reactions, Sheth says.

What’s more, start logging your experiences when you add aloe vera to your diabetes treatment plan. “I always tell my patients, when you start something new, or if you’re going from one diet to a different one, journal the side effects,” Winslett says. Write down how you feel (for example, energetic or fatigued) each day, how much you’re taking, and what other side effects — if any — you may be experiencing.

Because the FDA doesn’t put supplements through the same rigorous vetting as conventional medication, you’ll want to look for an aloe vera gel supplement that’s been third-party tested for safety. A few top testing agencies include NSF International, ConsumerLab, and USP.

More research on the effects of aloe vera for type 2 diabetes is needed before healthcare providers can recommend exact dosages, Sheth says. Existing research may offer a clue: In the Plant Medica study, participants with type 2 diabetes who took 300 mg of aloe vera gel capsules once every 12 hours for two months saw improvements in blood sugar, A1C, total cholesterol, and LDL cholesterol, without side effects.

That said, those are supplements — and you’ll want to think twice before downing aloe vera gel or raw leaves from the aloe vera plant. In the review published in the Journal of Clinical Pharmacy and Therapeutics, researchers reported a higher risk for bad reactions when participants took doses between 600 and 15,000 mg per day. Raw, crushed aloe vera leaves, aloe vera juice, and aloe vera gel capsules were also associated with negative side effects, including diarrhea, abdominal pain and cramping, and muscle weakness.