Borderless
By Sulaimon Olanrewaju On Apr 11, 2021 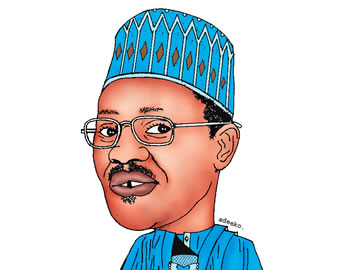 In his missive to the King of the Hashemite Kingdom of Jordan, King Abdullah ll Bin Al-Hussein, on Thursday, to express his solidarity with the monarch on the resolution of a recent rift in the royal family, President Muhammadu Buhari informed the King that he was in London taking a short rest.

It is stunning that President Buhari can be more concerned about the storm in a teacup in Jordan than he is concerned about the turmoil in his own country. Before the presidential jet that took Buhari on his medical tourism to London took off from Abuja, the country’s temperature had already hit the boiling point as it was embroiled in a number of crises but the man elected to steer the ship of the country away from crisis into peace and prosperity did not deem it necessary to address any of them before he took his leave.

Right now, activities in all the public hospitals in the country are grounded because of the strike action embarked upon by resident doctors, which has forced relations of the sick people on admission in those infirmaries to evacuate them from those hospitals, yet the president does not consider it important enough to intervene in the matter.

Imo State has been on fire for over one week, quite a number of police stations have been set ablaze, killings have gone up an octave in the state, kidnapping has also been on the rise, the people live in palpable fear because of the heightened level of insecurity in the state, yet the president has not considered it important enough to issue a statement on the matter.

Since Tuesday, the nation’s polytechnics and monotechnics have been thrown into a state of inactivity as a result of the strike action embarked upon by the Academic Staff Union of Polytechnics (ASUP) in reaction to “unpaid salary backlogs, unfulfilled agreements and victimization.”  The Minister of Education, Adamu Adamu, had held a meeting with the leadership of the union with the hope of staving off the industrial action but that did not work. So, after being forced to stay at home for about 10 months as a result of Covid-19 pandemic, polytechnic students are back home now. Yet, for President Muhammadu Buhari, mum has been the word.

The strike action embarked upon by members of the Judiciary Staff Union of Nigeria (JUSUN) has paralysed the nation’s courts for over one week. The strike has stalled many processes and has injured many business interests. Yet, our President, who was quick to send a message to King Abdullah ll Bin Al-Hussein of Jordan, over what the king himself referred to as a family matter, has not seen the need to feel concerned about a national crisis.

Apart from being more concerned about other people’s private matters than he is about the nation’s situation, it is a thing of wonder that President Buhari can rest while the nation is in a state of anarchy.

The economy is in shambles, rather than thinking of how to revamp the economy and make it work for the populace, our President is on a short rest in London.

Poverty has reached an unprecedented level in Nigeria with the country becoming the official headquarters of global poverty. But this has not bothered our President. He felt so good about the development that he had no qualms travelling to another country for a short rest.

Many young Nigerians who are willing to work cannot get any place to work as unemployment rate has hit 34 per cent. Yet this does not cut any ice with our President, who is currently taking a short rest in London.

Insecurity has reached an all-time high level as no part of the country is spared the sting and twinge of banditry, kidnapping, armed robbery or insurgency. Yet the man elected to douse tension in the nation is taking a rest in far away London. Talk of Emperor Nero fiddling while Rome was on fire.

What all of these indicate is that while Nigerians love President Muhammadu Buhari, the feeling is not mutual. Nigerians loved Muhammadu Buhari so much that they entrusted their collective destiny in his hands in 2015 believing that having the retired General in the saddle would mean a prosperous today and a secure future. Despite his less than sterling performance in his first term, Nigerians again committed their collective destiny to Buhari in 2019. But in spite of the love shown the President by the people, all they get in return is disdain. This is because although Nigerians love Buhari, the President does not care a hoot about them.

Buhari wanted to be President so much that he wept openly in 2011 after losing that year’s presidential election to Goodluck Jonathan. Nigerians were so moved by his emotion and apparent commitment to a better and greater Nigeria that they fell in love with him and decided to gift him the presidency in subsequent election even when he could not present his credentials. But while Buhari’s aspiration has been fulfilled, many Nigerians have been left in the lurch and feel despondent. But unfortunately, the President is too fulfilled to bother. As far as he is concerned, he has achieved his aim, nothing else matters.

Nothing can be more tragic than a one-sided love relationship.

Agberos’ gain as the people’s loss

Nigeria: Living in the past, killing the future