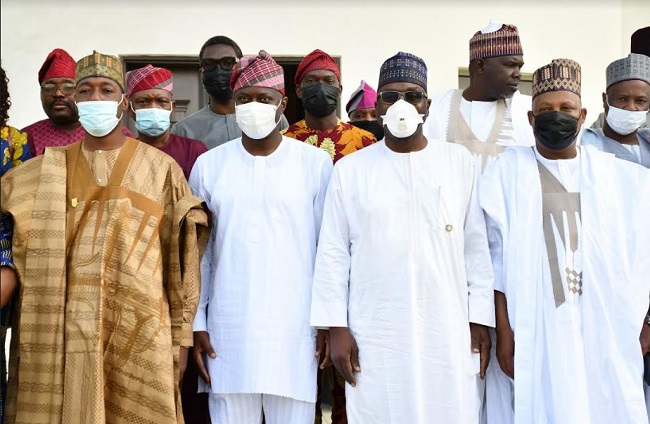 Governor Seyi Makinde and his Borno counterpart, Babangana Zulum have cautioned political leaders, state and non-state actors against fueling insecurity, crisis through their actions and inactions, noting that the consequences were grave not only upon the present generation but also on generations to come.

Rather, they emphasized the need for leaders across political divides to shun sentiment and come together to proffer lasting solutions to the challenges of insecurity currently bedevilling the country. The duo spoke separately at the Oyo State Government House, Ibadan, on Saturday, when the Borno State governor paid a courtesy call on his Oyo State counterpart.

Stressing the nexus between peace, security and development, Zulum warned that the masses and rich alike will suffer the consequences of insecurity being fuelled in the North East abs North West, especially.

Zulum said “You have seen and heard what has been happening in the far North-East.

“It is because of lack of peace and therefore, I am calling upon all those that are residing in these tension towns and in generally the North West to be careful of not fueling crisis because nobody knows what will happen at the end of the crisis.

“The state and non-state actors should also be very careful when the chips are down, the masses will suffer. This is something very important. Their father and grandfathers will suffer. The rich men will pack their property and go.”

Referencing the Shasha market crisis, Borno State governor particularly called on the residents and people of Ibadan not to break the agelong tradition of peace and hospitality that the city and state were known for, noting that many people just like himself had lived in the city in time past and could attest to its peaceful nature.

“Ibadan was a very peaceful city, many of us studied here in the University of Ibadan, we lived together happily and I think this has to continue.

“So, we must preserve this land, protect the environment of this place and ensure the stability of this very important town for benefit of humanity. Government has to be careful also in handling such issues, especially politicians we have to be careful,” Zulum said.

Zulum who was in the state to receive an award of honour conferred on him by the Alumni Association of the University of Ibadan said the visit was also to sympathise with Makinde on the Shasha market crisis and the most recent inferno at the Araromi spare parts, Agodi-Gate, Ibadan.

Speaking, the host Governor Makinde congratulated the Borno governor on the award conferred on him, noting that the honour is well deserved.

He said the security challenges facing the country should afford the leaders an opportunity to pull together to tackle the issue head-on, adding that he would offer himself to work and collaborate with other leaders irrespective of party lines in a bid to get a lasting solution to the challenges.

Makinde said “I also thank you for stopping by. What that is demonstrating is that it has nothing to do with the party.

Governance is something that is collective and the focus is the same. I have had the opportunity to host here my brother the Governor of Kwara state and we are also collaborating. When he came we visited the IITA together.

“Some of the programmes we are collaborating with IITA, now they want to do it with Kwara. And also we have set up a team to go to Kwara and see some of the good things they are doing there that we also want to learn and collaborate and we believe this is the only way we can develop our country.

“So, I want to thank you for this visit and for your concern for us in Oyo state, first with the crisis in Shasha and the recent fire incident at the spare part market. We thank you for standing by us at this moment of need for us, but also we want to acknowledge the hard work you are doing in Borno state especially as it concerns insecurity.

“We want to encourage you, and we want you to know that we are praying for you. And by God’s grace, you will succeed.

Yes, we know that our country is currently going through issues, challenges, but as leaders at this point in time, it is time for us to come together, it is not about sentiments because we have to explain to our people, the citizens, the residence of our various states and places that yes, countries do go through challenges but, when the leaders pull together, and we cast aside partisanship.

“Pull together to tackle that problem, then we have a chance to succeed. So, I want to encourage all our leaders. Yes, the North East is faced with security issues, just like other parts of the country, but these are not challenges that we cannot surmount. The only thing that we need is for us as leaders to pull together.

“For me personally, I offer myself, irrespective of party, to build bridges that will ensure that we pull together and defeat all the problems that we are currently having.

“So, this courtesy visit is timely and it is a demonstration to the whole world that we are together in the task of building our nation.

Others are Speaker, Borno State House of Assembly, Abdulkarim Lawal; Deputy Speaker Abdulahi Askira who led other members of the state legislative arm to support the governor.

Makinde received the guests in the company of top government functionaries.

In spite of the huge investment in the water sector by the government and international organisations, water scarcity has grown to become a perennial nightmare for residents of Abeokuta, the Ogun State capital. This report x-rays the lives and experiences of residents in getting clean, potable and affordable water amidst the surge of COVID-19 cases in the state…actors against fueling crisis  actors against fueling crisis