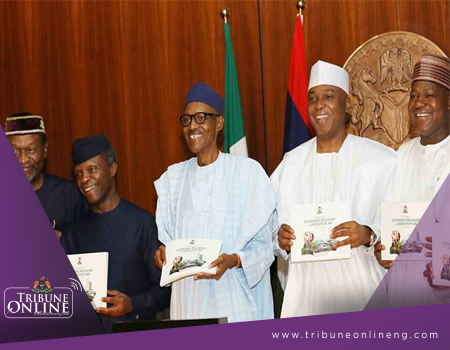 President Muhammadu Buhari on Wednesday inaugurated the Economic Recovery and Growth Plan (ERGP) 2017-2020 with a call on Nigerians to support its smooth implementation to change Nigeria for good.

The President, who inaugurated the plan in the Presidential Villa, Abuja, assured that with its inauguration, his administration was approaching the solution to the nation’s economic challenges with the same will and commitment it had demonstrated in the fight against corruption, terrorism and militancy.

He noted that the ERGP had brought together all the sectoral plans for agriculture and food security, energy and transport infrastructure, industrialisation and social investments together in a single document.

According to him, it builds on the Strategic Implementation Plan and sets out an ambitious roadmap to return the economy to growth and to achieve a seven per cent growth rate by 2020.

He, therefore, enjoined state governments to draw aspiration and strategic direction from the plan to articulate their economic programmes, particularly in the development of the real sector.

“The Economic Recovery and Growth Plan brings together all our sectoral plans for agriculture and food security, energy and transport infrastructure, industrialization and social investments together in a single document.

“It builds on the Strategic Implementation Plan and sets out an ambitious roadmap to return the economy to growth; and to achieve a seven per cent growth rate by 2020.

“The Plan I am launching today therefore sets out what we, as government, are committed to do, to create the enabling environment for business to thrive. The Plan is a national plan, hence the role of state governments is critical to its success.

“I therefore wish to appeal to the state governments to draw inspiration and strategic direction from the Plan to articulate their economic programmes, particularly in the development of the real sector.

“I call on all Nigerians to work with us to ensure we achieve those objectives. The contents of the Plan are already familiar to a broad cross-section of Nigerians because it was developed in consultation with a wide group of stakeholders, including the National Assembly, State Governments, the business community, labour unions, academia, civil society groups and development partners.’’

He reiterated the determination of his administration to change Nigeria from an import dependent country to a producing nation.

President Buhari, who expressed the commitment of his administration to to have a strong Naira and productive economy, stated that Nigeria must become “a nation where we grow what we eat and consume what we produce’’.

“Our aim simply put, is to optimise local content and empower local businesses. We seek not just to take the Nigerian economy out of recession but to place it on a path of sustained, inclusive and diversified growth.

“We are determined to change Nigeria from an import dependent country to a producing nation.

“We must become a nation where we grow what we eat and consume what we produce.We must strive to have a strong Naira and productive economy.

President Buhari commended the Ministry of Budget and National Planning for successfully coordinating the plan’s development.

He also saluted the efforts of the Economic Management Team under the leadership of the Vice President for overseeing the drafting of the plan.

“I am pleased to present this Economic Recovery and Growth Plan for use by the Nigerian people, our friends and partners and to guide our development efforts over the next four years,’’ he added.

In their separate goodwill messages at the event, the Senate President Bukola Saraki and Speaker of the House of Representatives Yakubu Dogara assured that the National Assembly would support and ensure successful implementation of the Plan.

Gov. Abdulaziz Yari of Zamfara, who spoke on behalf of the 36 governors of the federation, thanked President Buhari for his support and assistance to state governments.

He noted that such assistance had helped the states in addressing some of their socio-economic challenges.

Earlier in his remarks, the Minister of Budget and National Planning, Sen. Udoma Udo Udoma, said the broad objectives of the ERGP were to restore growth, build a globally competitive economy and subsequently build a self-reliant economy.

According to him, 60 interventions have been identified for execution in the next four years to achieve the objectives.

“Our aim is to create a culture where Nigeria continuously seek ways to add value to the resources we have been blessed with. In short, our aim is to change Nigeria, and change for good.

“To achieve this, the plan articulates up to 60 interventions and initiatives, that must be executed and/or completed within the next four years to tackle, and to remove, impediments to growth; to make markets function better; and to leverage the power of the private sector.

“However, this growth is to be archived without compromising the core values of this nation such as discipline, integrity, social justice, self-reliance and patriotism.

“And, of course, all the initiatives in the Plan will be implemented in such a manner as to continue to strengthen and promote national cohesion and social inclusion.”

The Medium-Term ERGP was approved by the Federal Executive Council (FEC) during one of its meetings in 2017.

ERGP has among its broad strategic objectives, restoring sustainable, accelerated inclusive growth and development; investing in the people; and building a globally competitive economy.

The Plan was specifically designed to take the country out of the recession and, in the long term, continue to grow the economy while planning of the 2017 was also based on the ERGP to accelerate speedy recovery and development of infrastructure.