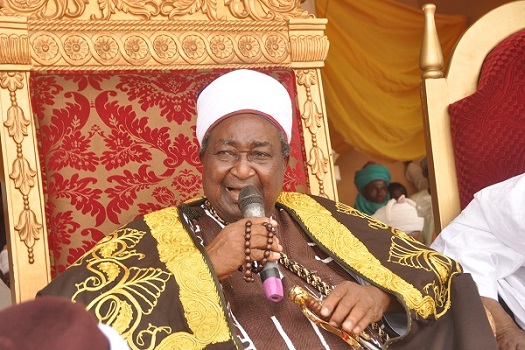 President Muhammadu Buhari on Thursday said he received with profound sadness news of the passing of the Emir of Lafia, Alhaji Isah Mustapha Agwai I.

A statement issued by Senior Special Assistant to the President (Media & Publicity), Garba Shehu,  in Abuja noted that on behalf of the Federal Government, the President extended heartfelt commiserations to Governor Umaru Tanko Al-Makura, the Lafia Emirate Council, the people of Lafia and Nasarawa State “on the passage of the highly respected monarch who ascended the throne of his ancestors in 1974.”

The President assured them of the fullest sympathy of the Federal Government as they mourn the chairman of the Nasarawa State Council of Emirs and Chiefs and state chairman of Jama’tul Nasril Islam (JNI), who will be fondly remembered for his exemplary leadership and tireless efforts at improving the lives of his people.

The statement said that President Buhari affirmed that in the course of his remarkable 44 years on the throne, Alhaji Agwai’s devoted himself to championing inter-religious harmony, tolerance, peace building and conflict prevention as well as promoting the role of education in nation building.

The statement noted that as the remains of the late Emir is buried on Friday, the President prayed Allah to receive the monarch’s soul and grant him peaceful repose. He also prayed that Allah will grant the people of Lafia a worthy successor.

2019: I am determined to beat Jega’s records ― Yakubu, INEC chair

Atiku assures youths, women 70 per cent participation in his govt