Budget padding: No legislator can be charged for performing his constitutional duty —Dogara 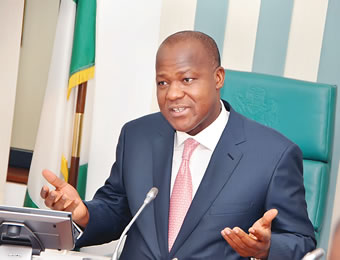 NO member of the National Assembly can be investigated or charged to court for performing their constitutional responsibility of lawmaking, including budget, Speaker of the House of Representatives, Honourable Yakubu Dogara, has said.

Dogara, who spoke in Abuja, on Thursday, at the Civil Society Dialogue Session on one year of the legislative agenda organised by Policy and Legal Advocacy Centre (PLAC), noted that the 2016 budget had been controversial from the beginning, adding that it took dialogue, compromise and consensus to produce a workable document.

The Speaker argued that by virture of the provisions of the Legislative Houses Powers and Priviledges Act, no member of the parliament could be charged to court or investigated for exercising their powers of law making.

On the powers of the National Assembly over budget, Dogara maintained that the appropriation bill was just like any other bill which must be subjected to normal legislative processes and scrutiny.

“The constitution talks about estimates of revenue and expenditure to be prepared and laid before the National Assembly. The constitution did not mention the word budget and the reason is very simple. Budget is a law. Going by very predestrian understanding of law which even a part one Law student can tell is that the functions of government is such that the legislature makes the law, executive implements and the judiciary interprets the law.

“The budget, being a law, therefore, means it is only the parliament that can make it, because it is a law. And I challenge all of us, members the media and Civil Society Organisations (CSOs) to look at our law and tell me where it is written that the president can make a budget.”

The Speaker maintained that by the provisions of the 1999 Constitution, only the National Assembly had powers to scrutinise the revenue and expenditure estimates submitted by Mr President.

“What I am saying is further reinforced by section 80(4) of the Constitution which says that no money shall be withdrawn from the consolidated revenue fund or any other fund of the federation except in the manner prescribed by the National Assembly.

“I want this thing to sink so that we can understand it from here and perhaps, it may change the ongoing discourse.

“If you say the National Assembly doesn’t have the powers to tinker with the budget, that we just pass it. When it is prepared and laid, we turn it into a bill. If it is a bill, how does other bills make progression in the parliament in order to become law?

On zonal intervention projects, popularly known as constituency projects for members of the National Assembly, Dogara said it was the only means through which lawmakers attract federal projects to their constituents.

This, he said was necessary because the projects selection process was such that it lacked integrity, as it was always lopsided against most federal constituencies.

The Speaker emphasised on the need for more sensitisation of the public on the role of the legislature in the  appropriation process, saying the misconception of this role led to attempts to discredit the 2016 budget.

He said: “Recent efforts seeking to discredit the document are a consequence of inadequate knowledge of the legal framework governing appropriation in a presidential democracy. This has, nonetheless, opened a new vista of duty for us as a legislature to enhance both internal competences of members, as well as the sensitisation of the public on the role of the legislature in a presidential democracy.

“The 2016 budget was controversial from the outset, but the House handled the controversy with maturity, employing democratic tools of dialogue, compromise and consensus by which an implementable 2016 budget was passed and assented to.”

While commending the role of civil society organisations in educating the public, he stressed that “it is our duty and responsibility to remove any clog in the wheel of progress once we have made the determination that such a situation exists.”

The Speaker explained that the Legislative Agenda was borne out of the House of Representatives’ consciousness of the fact that in order to deliver quality service to the citizenry, the content, as well as processes and procedures adopted by the House, must be right.

We won’t punish anyone for padding —APC

Every state in Nigeria is safe, FG replies US