by Tribune Online
in Top News
Reading Time: 1 min read
A A 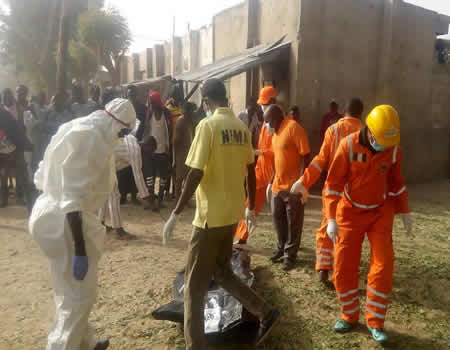 Two suicide bombers are feared dead around Dalori quarters, a small settlement near the Dalori internally displaced people IDP’S camp which is the largest in Maiduguri, the Borno State capital.

National Emergency Management Agency (NEMA) sources said that the twin explosion took place at about 7:00 p.m., when the two suicide bombers laced with improvised explosive devices IEDs attempting to get into the crowd blew themselves up at Dalori quarters living one person injured on impact.

“One person was inflicted with mild injury whereas the two suicide bombers were both killed by the explosion,” said the source.

Meanwhile, curfew hours in most IDP camps remain 6:00 p.m., while the rest of the state capital and Biu town shut down at 10:30 p.m.