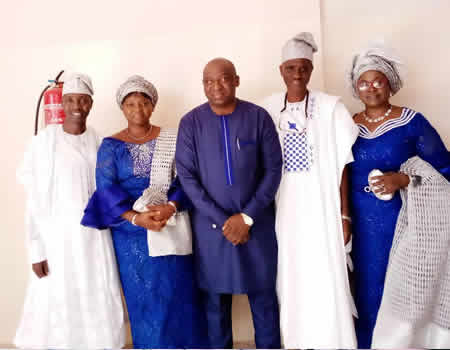 The immediate past  Registrar of Bowen  University Iwo, in Osun State, Dr Kayode  Ogunleye   has  declared that Bowen  University would continuously need maximum support of  all the stakeholders of the institution, especially  members of the Baptist Convention in Nigeria and in Diaspora, in cash and in-kind,  to complement the efforts of the management of the  institution in their bid to upgrade the Ivory Tower into  a world first-class institution in the country.

This declaration was made on Wednesday, during the appreciation and thank Giving service organised by the university for him, as an immediate past Registrar, as well as for the immediate past Bursar of the institution, Mr  Taiwo Okunade to commemorate the end of their tenures in the university.

According to him, if members of the Nigerian Baptist Convention would want their private university to be of international standard, then we have to work together as stakeholders to bring the ongoing transformation and rebranding process in the university into fruition.

He said the university is endowed with many first-class researchers and professors emeritus of international standard working as a team with a visionary leader, Professor Joshua  Ogunwole, as Vice-Chancellor of the university who has what it takes to manage a 21st century  Ivory Tower of our dream. He appealed to every stakeholder of the university, including the alumni,  to participate in the ongoing development process in the university, stressing that no university
in the world can rely on funds acquired from.  tuition

Speaking in the same vein on the occasion, the immediate past Bursar, Mr Taiwo  Okunade,  asserted that sustaining the university through tuition alone may  not be  feasible because  university education is highly capital intensive, as he called on the  members of  the Nigerian Baptist Convention who are the co-owners of the institution not to rest on their oars to do more  for the university.

He said, ” For the fact that infrastructural and research facilities are in place to produce productive graduates in all the faculties in the university, the working capital for running cost is too enormous,  and there is need for co-owners to contribute their quota towards the development of the institution.

God has blessed the university with a visionary leader, as Vice-Chancellor, Professor Ogunwole, has the capacity to steer the ship of the institution to fruition. He needs our supports.”

In his response, the Vice-Chancellor, Professor Ogunwole,  while he described the services of the outgoing Registrar and the Bursar to the university as great, he reiterated the commitment of the university to produce God-fearing

“Let us take up the mantle together and make this a foremost Christian institution of excellence, by building God-fearing leaders that will define the future,” he said