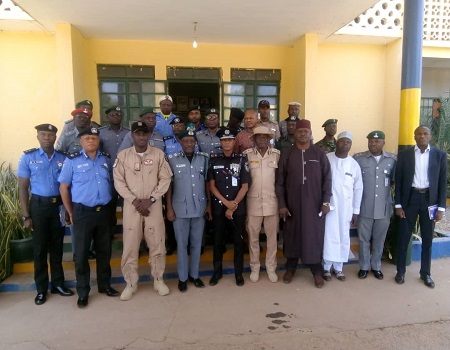 The closure of Nigeria’s land borders has been described as a blessing in disguise for the Nation’s economy as it had unmasked numerous potentials.

This is according to the Sector 4 Drill Commander, Ag. ACG A.A. Mohammed, when he led his coordinating team to the Sokoto State Commissioner of Police, CP Ibrahim Sani Ka’oje in his office on Thursday.

According to a press statement signed by the PPRO of the command, ASP Muhammad A. Sadiq, and released to journalists in Sokoto on Thursday.

In his remarks, the Commander Stated that the visit is aimed at motivating, monitoring and assessing the border closure drill teams.

He disclosed that the border closure has unmasked numerous potentials of the Nigerian economy and the populace, also, higher revenue generation and enhanced inter-agency collaboration are equally being achieved.

He also stressed that the fight against illegal goods is being taken to the doorsteps of law violators and mentioned that about 150 containers have been seized, with products worth 1.8 million naira in each container.

He, however, pleaded for continuous support from the State Police Command.

In his own reaction, CP Kaoje clarified that Police being the lead internal security agency will remain relentless in prompt response to calls for reinforcement by the border drill and any unforeseen security threat,

He equally urged the team to include organizations like the National Drug Law Enforcement Agency (NDLEA), National Agency for Prohibition of Traffic in Persons (NAPTIP) and Nigerian Security and Civil Defence Corps (NSCDC) in order to expand the scope of the drill.

The Commissioner further advised the Junior Officers to remain professional, while applauding the Comptroller General of Customs for steadfastness and professionalism towards securing the borders of the country.