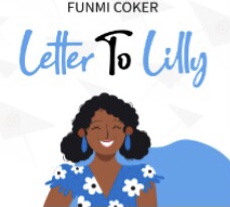 ‘Letter to Lilly’ is a riveting collection of poetry, written by Funmi Coker. It was published this year (2021) by a United Kingdom based publishing firm, The Roaring Lion Newcastle.

The collection umbrellas forty-three (43) poems that magnify the ever delicate subject matter of the girl-child, and Coker, by style, emphasized on some of the themes by displaying them in pairs. The themes to be discussed amongst others are on identity, gender inequality, malicious ideology, domestic violence on women, and the effects of how religious fanatics perceive and apply superstitious beliefs.

The theme of identity crisis as mayhem in the society is a striking one in the collection and Coker’s fronting of it by the poem, ‘Identity’, is not coincidental. Identity crisis is a psychological displacement of one’s true self; a search for one’s personality which could be the very foundation of the prevalent issues of the girl-child in the society. In this poem, the persona makes use of extended metaphor to show comparison; and contrast, to show difference. For instance, the first and second stanzas compare the girl-child to ‘budding flowers of the hibiscus’ (beauty); ‘the pride and hide…/and the drops of rain’ of the land and land’s soil respectively.

The third stanza changes the appraisal tone to that of a compelling one. The persona instructs girls not to mind what people think of them through the biblical mythical contrast of demons and angels. But they must continually flourish like their ascendants (‘mature crops’) had done.

Also, the persona mechanizes pun to an advantage. She instructs girls not to cover up their ‘make-up with makeup’ in the fourth stanza. This implies that they shouldn’t fake (make-up) their true identity with colourants on the skin (makeup). By doing that, they are ‘relegating’ true beauty and ‘mistaking’ fakeness ‘for taste’. Lastly, the persona, in the last stanza of the poem tells them to follow the desires of their heart, that confining themselves to ‘the walls of a kitchen’ is a philosophy of the ignorant. The persona ends with an assuring tone: ‘Surely, you’ll be fine.’ The same theme can be seen in the second poem (‘What Were you Told?’).

In addition, this beautiful collection of poems treats the issue of gender inequality in the society, because the world is largely patriarchal. It is strongly evident in the sixth and thirty-third poems (‘Even Numbers’ and ‘A Poem of Adjusted Clichés ’). In the poem ‘Even Numbers’, the persona uses a symbol—evident in the title; biblical allusions and metaphors to say that both men and women are the same. Even numbers connote the idea of a pair. And another word for ‘a pair’ could be two similar things taken together/as same. Also, in making reference to the biblical creation story of Eden, the persona pinpoints the creation of opposites in ‘seedtime & harvest/ cold & heat, summer & winter’ which God created alongside two different genders, but as one (‘you two are one- even’). I, personally, salute the creativity on the last word, ‘one- even’, which is an oxymoron for oneness in two. To buttress, even the rhyme scheme (abbacdeb) shows similarity (unity) in the ‘b’: ‘man & woman/ you two are one-even’. To add to the icing, ‘A Poem of Adjusted Clichés supports the first poem discussed in this paragraph.

The persona presents some clichés which should not be, thereby preaching on inequality of gender. But like a contemporary poem, Coker presents a prophetic message, saying that: ‘Be it the easy way or the hard way/ we’re very close to deliverance from/ the blindness in our sight/ and our tethering to a/ gender-restrained mindset.’

Malicious ideology is not sleeping in this collection. It is not only poking out its head but also its full body. The girl-child has been subjected to wrong ideologies from the outset. Traces of the theme can be seen in the poems: ‘Invention’, ‘Becoming a Woman’, ‘Aims and Objective’ and ‘Daughters of our Land’.

‘Invention’ comes in a prosaic (story-telling) form. It lampoons the wrong ideologies people carry in the name of traditions; showing its examples and its result. It resulted to the creation of feminism. In ‘Becoming a Woman’, the persona in a free verse, tells the throes she has to bear seeing males go to school because ‘a girl is to become a woman…at home’. The poem has no single comma. The same for a full stop until one appeared at the end. This implies her wailing state to pouring out her emotions. Also, the personal pronoun, ‘I’ is presented in lower cases which could suggest how ‘inconsequential’ or ‘undervalued’ the girl-child is seen in the society.

Another example can be fetched from ‘Aims and Objective’, where the society aim to have the girl-child to the ground ‘and bask/ in the gratification of their mindset.’ Still, the persona encourages them to ‘dream big and achieve bigger’.

Lastly, in ‘Daughters of our Land’, the persona says that: ‘The daughters of our land become/ women before they learn to be girls./ That’s the way of our land,/ But who made it so? The rhetorical question is meant to create a ponder in a world where girls are given into marriage before they are matured.

Furthermore, this collection treats the theme of domestic violence on women and its horrors in the poems: ‘The Birth of Silence’ and ‘Her Body Was a Cracked Wall’. In ‘The Birth of Silence’, a child tells the horror of how the father beats the mother at home. The child suggests how the father drowns the mother’s voice by raising the volume of ‘the flat screen’. The child further compared the mother’s skin to that ‘desperate dews blotting the sky’. This gives the reader a mental picture of scars on the body.

The child (the persona) continues with the repetition of ‘Dad’s legs dribble her’ till the floor was coloured with red and how people told the child’s mother to submit because she’s ‘a woman’. It continues until ‘silence births silence’. This could mean the mother’s death or how it remained the same where nobody said anything to the battering. Likewise, the last stanza of ‘Her Body Was a Cracked Wall’ shows how women undergo violence from their husband.

Finally, the last point to be deconstructed is on the theme of how religious fanatics perceive and apply superstitious beliefs. Many Africans are religious fanatics and illiterates who allow these factors to cloud their judgment. This theme can be seen in ‘Genetics Gone Wrong’ and ‘Legions’. In ‘Genetics Gone Wrong’, a child suffering from heliophobia killed a man because ‘he called him a curse’. Heliophobia is the fear of the sun, sunlight or any bright light.

And it is a genetic disorder which is not caused by the child but as a result of his/her parent’s genes. Notwithstanding, Africans see these beings as evil beings. Also, heliophobic beings could be easily traumatized, depressed and frightened. Hence, it could be suggested that the dead man might have been killed because that child was already ‘crying for freedom’. In addition, ‘Legions’ could be exploring the degrading system of Christianity.

The poet uses a dramatic form to create a scene of how people could be possibly mistaking the ability for a being to switch characters so well for spiritual possession. The persona’s gender is not stated which means it could be any gender. In the second stanza, it suggests how people mistaken to be possessed are whipped to scars with brooms. The persona went on to say in the third stanza to show more abuse… as ‘candle wax burned deliverance into my skin.’

In conclusion, Funmi Coker has enlivened the push for the girl-child in her work. She has re-taken the place of Audre Lorde, Ogundipe-Leslie, Warsan Shire, Dr. Stella Nyanzi and many more in beating the drums to be heard. One can truly say that like Tunde Kelani’s 1999 satiric Yoruba film (Saworoide), Coker is ‘Ayangalu’ (a certified drummer) who has beaten the drum. Gong! Gong! Gong! It sounds, let defaulters who listen, take heed, lest retribution will take no heed.