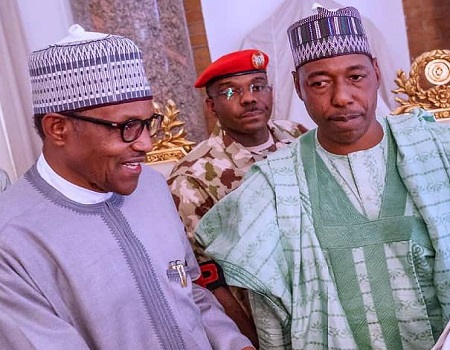 The governor of Borno State, Professor Babagana Zulum, on Thursday met with President Muhammadu Buhari to brief him on the security situation in his state following the recent onslaught on Boko Haram by Chadian army led by President Idriss Deby Itno.

The meeting, which took place at the Presidential Villa, Abuja, saw the president assuring that the Federal Government will take more decisive and proactive measures towards ensuring that the Boko Haram menace is totally eliminated for sustainable peace and development.

Buhari and Zulum were said to have discussed the Chadian army attack on the shores of Lake Chad and its implications on Nigeria’s national security.

After analysing the situation, both men were said to have agreed that the time has come to once and for all put to an end the senseless acts of terror by Boko Haram and other criminal elements operating in the region.

Recall that the Chadian president had joined the country’s soldiers recently in the frontline of the fight against Boko Haram terrorists in the country while appearing in military fatigue to lead the operation to decimate the terrorists from Chadian territory.

Operating with the codename “Operation Wrath of Bomo,” the Chadian army came after terrorists dealt the heaviest blow to the Chadian military after an assault killed over 90 soldiers.

Deby thereafter vowed to defeat terrorism to allow people in the Lake Chad region to live in peace.

Deby had said, “We launched the ‘Wrath of Bomo’ operation. We must defeat terrorism to allow our people and especially those of Lake Chad to live in peace. This is the whole meaning of the fight that our valiant soldiers are waging against Boko Haram.”

The Chadian army was said to have destroyed several Boko Haram bunkers, recovered cache of arms and arrested a top Boko Haram commander in the operation, which took place at Kelkoua bank and Magumeri in Borno State.