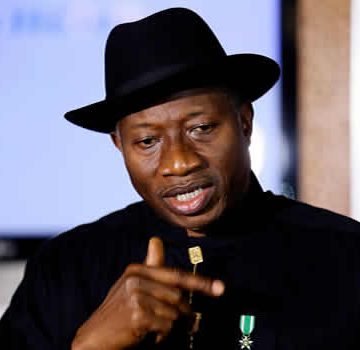 KINSMEN of former President Goodluck Jonathan have fired back at the leader of the Indigenous People of Biafra (IPOB), Nnamdi Kanu, for describing the former president as weak and incompetent.

The kinsmen under the auspices of Ogbia Brotherhood Youth Council (OBYC), in a statement made available to newsmen on Tuesday, condemned Kanu for making such disparaging statement against the person of the former president whose administration contributed immensely to the development and stability of the country.

The statement signed by OBYC National President, Dr Laguo L. Gilbert, the group described Kanu’s statements as most unfortunate and therefore advised the public to disregard it.

He warned Nnamdi Kanu “to desist forthwith from linking a man of honour like Dr Jonathan with his directionless agitation.

“Such radical statements remain one of the reasons why the IPOB agitation lacks its required substance.

“The OBYC, however, advises Mr Kanu to learn from the mistakes made by the group in the past and its predecessor, as this will be necessary to implement its vision,” the statement said.

The group maintained that bringing Jonathan into Biafra issues in such cavilling manner would not help or give credence to its deep-rooted rancour.

“Bringing former President Jonathan into its issues in such a disrespectful manner will neither help nor give credence to its rancour. OBYC therefore warns Nnamdi Kanu to desist forthwith from linking a man of honor like Dr Jonathan into his directionless agitation,” the statement added.

It would be recalled that the IPOB leader had reportedly chided the former president for not completing the East-West Road and for doing nothing for his people.

“I love Yar’Adua and Shehu Shagari, Patience Jonathan would have made a better president than Goodluck,” Kanu, had said.

We have not increased our tuition fees —OAU