. As jubilation continues in Yenagoa 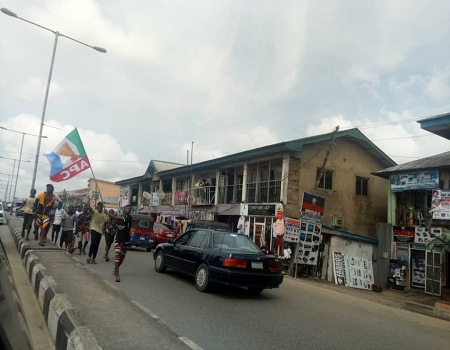 The 49-year-old candidate of the All Progressives Congress (APC) was at the wee hour of Monday, declared the winner of the 2019 Bayelsa state governorship election held last Saturday.

In a message to the people shortly before he was officially declared the winner of the governorship election, Lyon vowed to “make the state great again”.

The APC candidate beat his PDP counterpart with a margin of 209, 380 votes.

Before the current development, the PDP has got a stranglehold of the oil-rich state since 1999 with the incumbent, Seriake Dickson rounding off his second term in office.

Meanwhile, as of 10:30a.m, jubilation has continued in the streets of Yenagoa over the victory of the APC governor-elect, Lyon as youths, armed with APC flags, were seen chanting and dancing in praise of the victory.