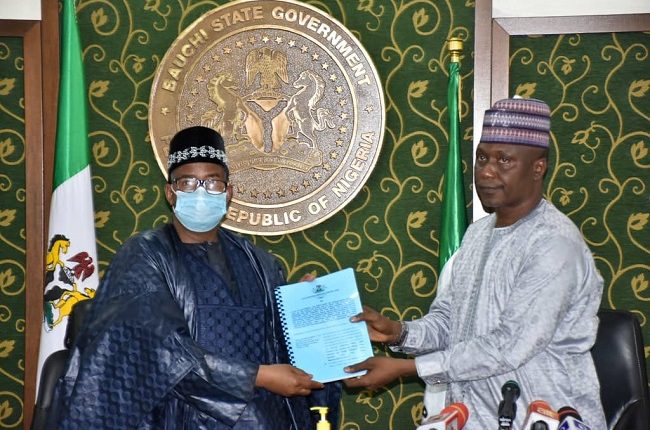 To be able to complete some ongoing major developmental projects for the year 2020, Bauchi State government has appropriated the sum of N42.8b as a supplementary budget consequently, the State Governor, Sen Bala Mohammed, has signed it into law.

The supplementary appropriation bill is made up of a Capital Expenditure of over N36.8 billion and a Recurrent Expenditure of N6 billion for the remainder of the year 2020.

While signing the bill into law at the Government House, Bauchi on Monday, the governor said that the state is making history to have signed the 2020 supplementary budget after the COVID-19 pandemic which has crippled the world’s economy.

Bala Mohammed said that: “We are today again making history in collaboration with the House of Assembly and the Government of Bauchi and the state is moving forward that we are presenting this as the only state in the federation to do supplementation after COVID-19 pandemic and this is an attestation that Bauchi is working”.

He added that “We cannot allow ourselves to be cowards or cowed by the COVID-19 pandemic, our timelines, milestones must be achieved and we are working as a government to make sure that all the deliverables are being delivered within the timeline”.

He also said that his administration is giving special attention to the Internal Generated Revenue and will use it to borrow from the banks and not from the federal government pointing out that the state’s IGR has been raised by 300 per cent since he assumed office as governor.

The governor added, “We are not using our federation account to borrow this time around because we have exceeded the threshold for borrowing using our money from the federal government”.

“We are now looking inwards making sure we save cost, all the wastages that we used to do in terms of ghost workers, in terms of lack of collection of IGR at the local government and at the state levels have been put behind and we are now on the path of using our IGR to borrow money and execute projects and programmes that will put us on the paths of prosperity,” he said.

The governor also said that from the capital expenditure, his administration will embark on massive road constructions within the state capital and across the local government areas including the dualization of major roads in the city centre.

According to him, the recurrent expenditure will be used to provide vehicles and other logistics for security agencies in the state.

Bala Mohammed said that: “We are also looking at the other overhead of N6 billion, we have to provide for our security, our Army, our Police, the Civil Defense, they don’t have vehicles and we have to provide them with the means to make us save and secure. From the statewide vote, we are going to leverage and buy vehicles for them.”

Earlier in his speech, Speaker of the Assembly, Abubakar Y Suleiman, said that the supplementary bill was submitted by the governor to the Assembly last Friday.

According to him, the House expedited action on it to ensure that it is passed without delay to allow the governor provides dividends of democracy to the citizenry.

The Speaker stated that: “You presented this bill to us last week Friday and because of our zeal just like the governor, we felt we should not waste much time in going through this document and then finally passing it into law.

Abubakar Suleiman said that “The entire members of the State Assembly are going on the same direction with the Governor and we are always ready to partner with you to play our own constitutional duty to ensure that the people of Bauchi state enjoy dividends of democracy”.

The Speaker concluded that even though the year was ending, the governor decided to send the appropriation bill for legislation by the House saying that, “this shows that the governor is always eager to work for the people of Bauchi state.”