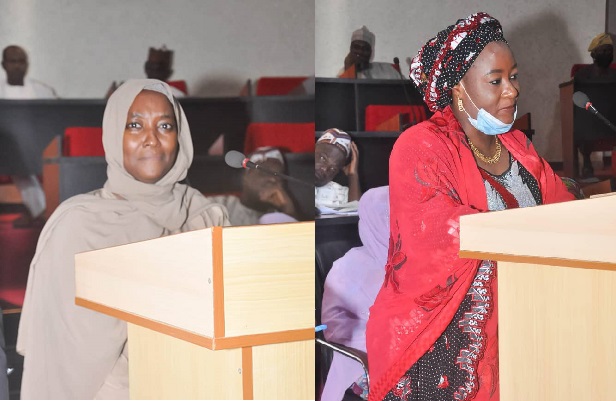 The Assembly at its sitting of Wednesday gave the confirmation after the screening of the nominees whose names were forwarded by the Executive through the office of the Secretary to the State Government on Tuesday.

Maryam Garba Bagel who is from Dass Local Government appeared before the House for screening as Commissioner and member of the Bauchi State Executive Council.

Tijjani Muhammad Aliyu advised that since it has been the tradition of the house to give waiver and allow ex lawmakers to take a bow and go, she should only answer constitutional questions and then take a bow and go all the Members unanimously approved the motion.

The Speaker, Abubakar Y Suleiman, who presided over the sitting, asked the nominee constitutional questions which she responded to accordingly, Thereafter, the Members resolved to allow the nominee to take a bow and go.

The next nominee, Dr Asma’u Ahmad Giade from Giade Local Government also appeared before the House for the screening and the Speaker, Abubakar Y Suleiman asked the nominee constitutional questions and she responded accordingly.

Abubakar Y Suleiman informed the Members that the nominee is the daughter of the famous and highly respected elder statesman, Alhaji Ahmadu Giade, former DG of NDLEA and now an Adviser to President Muhammadu Buhari.

While Commenting on the nominee, Dan-Umma Bello representing Giade Constituency reechoed that the nominee is a daughter of a prominent Nigerian Alhaji Ahmadu Giade former DG of NDLEA and Adviser to President Muhammadu Buhari thus has a humble background and history of public service.

Dan Umma Bello added that the nominee has a very rich CV and is from a respected family therefore she is capable of holding the position of Commissioner.

Based on that, he sought the indulgence of the Members to allow her to take a bow and go especially being the first female nominee with a PhD presented to the 9th Assembly.

Majority Leader, Tijjani Aliyu, said that by the virtue of her father being incorruptible, religious, nationalist who served Bauchi State and the Country selflessly he seconded the motion move by Dan Umma that the nominee should take a bow and go.

He also thanked Governor Bala Mohammad for bringing three women into his cabinet as Commissioners which he said will inspire women and make them feel represented in the government.

Also during the plenary, Permanent Member nominees of Bauchi State Independent Electoral Commission appeared before the House for Screening, they are, Dauda Gauis, Abdulmalik Wakili and Adamu Zakari who responded to constitutional questions asked by the Speaker, Abubakar Y Suleiman.

In his contribution, Baballe Abubakar Dambam representing Dambam/Dagauda/Jalam Constituency said that Local Governments election is around the corner and it has been a tradition that ruling party wins all thus reminded the nominees that the position given to them is not a drama.

He advised that they should fear Allah and remember that Allah SWT will ask them to account for their action on the of judgement.

Baballe Abubakar asked the nominee to give assurance to the House that they will be fair and just to all parties participating in the election irrespective of religion, section and party.

But Deputy Speaker, Danlami Ahmed Kawule Zungur/Galambi Constituency) reminded the House that all the nominees are permanent members and not chairmen or commissioners of the electoral body, they will only help the Chairman and other commissioners in carrying out the responsibilities of the Commission.

He eulogized the nominees especially Malam Adamu Zakari for being a statesman and patriotic and are not expected to be found wanting on their assignment, however, Bakoji Aliyu Bobbo concurred with Baballe that they should give assurances that they will be fair to all.

According to him, Being people who hold various positions in the State they have all it takes to do their job with all sense of fairness and respect for the rule of law, according to the Minority Leader, he believes that the nominees are not members of any political party.

But Majority Leader, Tijjani Muhammad Aliyu disagreed saying that they know the nominees are card-carrying members of the PDP but they don’t care, all they want from them is to serve the state diligently, he, therefore, said that they should give assurances to the House that they will be fair.

The Majority Leader told the nominees that the members are not against their nomination because they know them and their capabilities and reminded them that they will all account for their actions, hereafter.

Mukhtar Suleiman representing Katagum Constituency explained that the nominees are indigenes of Bauchi State who will work for Bauchi, therefore the Members should give them benefit of doubt until they derailed from what is expected of them so that Whenever they err they can be called to order.

Musa Wakili Nakwada Bogoro Constituency congratulated the nominees for being chosen to serve their state. He said no one knows who will win the upcoming local government election in the State because God can give anybody victory.

Musa Nakwada, therefore, suggests that the nominees should be allowed to go and whoever lose the election should accept defeat.

Ali Dan’iya representing Chinade Constituency congratulated the nominees and hoped they will discharge their responsibilities diligently and reminded them that they are aged and more closer to their graves thus they should fear Allah and discharge their responsibilities diligently so as to escape the wrath of Almighty Allah and advised them not to allow themselves to be used by anybody.

Bello Muazu Shira from Shira Constituency prayed that the nominees will be fair and just to all during the upcoming local government elections and said that he knows the nominees and know them to be people of integrity but he still advised them to fear Allah and remember there is the day they will account their actions to Almighty Allah.

Bello Muazu added that the upcoming local government elections are very important to Bauchi State thus they should make sure it is free and fair.

Jamilu Umaru Dahiru representing Bauchi Central Constituency congratulated the nominees and hoped they will do well urging them to be just and fair. He prayed that people of Bauchi State will be happy with their work.

Musa Muhammad Lumo from Lere/Bula Constituency said that the nominees are well known to all therefore they should be allowed to take a bow and go since no one doubts their capacity.

Gazali Abubakar Wunti from Ganjuwa East Constituency said that the nominees are qualified and said that the law that established the Commission didn’t bar the Governor from appointing card-carrying members of any political party, it is at the discretion of the Governor to appoint anyone.

He reminded the nominees that the state spends about ten years without local government election, therefore they should be just and fair to all parties.

He said that going by the composition of the State Assembly where APC has 21 members, PDP 9 and NNPP one, there is no way one party can win all seats in the election and assured the nominees that they will help them with prayers so that they will conduct a free and fair election.

According to him, going by their CV, experience and age, nobody should force them to do wrong things at the detriment of their integrity and hereafter.

While Responding to the questions, Malam Adamu Zakari assured the House that being faithful they all know there is death and resurrection when everybody will give account to Almighty, therefore they will be just and fair. Thereafter the nominees were asked to take a bow and go.