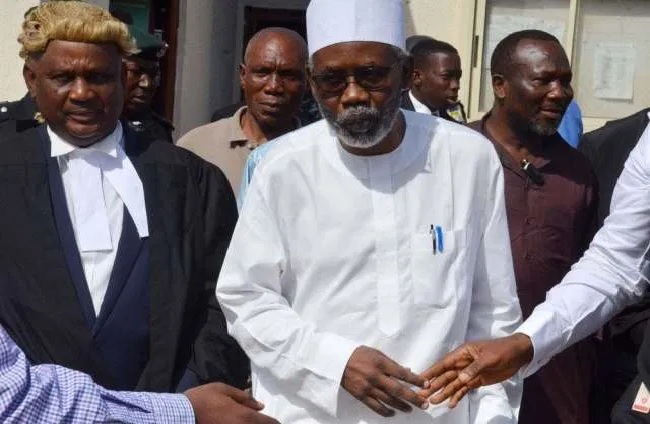 The Unity Bank Plc admitted on Thursday that the $2.2 million received from former Attorney General of the Federation (AGF) and Minister of Justice, Mohammed Bello Adoke (SAN) was for repayment of N300 million he obtained from the bank.

Former Acting Managing Director of the bank, Rislanudeen Mohammed made the confirmation at the federal high court in Abuja during the ongoing trial of Adoke and an oil magnate Alhaji Aliyu Abubakar on alleged corruption charges.

This is coming as a trial judge, Justice Inyang Ekwo, warned reporters to stop linking the trial with Malabu Oil issue, adding that they have access to court records and should ask if they need clarification.

Adoke and the businessman, Abubakar are standing trial on a 14- count criminal charge bordering on alleged money laundering and corruption preferred against them by the Economic and Financial Crimes Commission (EFCC).

Mohammed, a second witness of the EFCC in his evidence told the court how Adoke obtained a loan of N300 million from the bank and the efforts he made to ensure Adoke repay the loan.

He said that the loan was finally liquidated when Adoke handed over to him a sum of $2.2 million and that when converted to naira, it exceeded the principal loan amount.

The EFCC witness further disclosed that the former AGF collected the balance and closed the account after the bank deducted all necessary interest regarding the transaction.

Under cross-examination by Adoke’s lawyer, Chief Kanu Agabi (SAN(, the witness admitted accepting $2.2 million on behalf of the bank to liquidate the loan.

He further stated that the $2.2 million was not a proceed of crime because it was in repayment of a loan Adoke obtained from the bank.

“I received the money as an agent of the bank. The money is not available to be confiscated because it is not a proceed of crime.

“I have no reason to believe it is a proceed of crime. The money is not in Adoke’s account because it belongs to the bank”, he said.

The witness further told the court that collecting the money from Adoke’s house did not in any way constitute an offence because he acted as an agent of the bank.

Testifying further, the witness said upon the full payment of the loan, the title deed used as security by the bank was released by the bank to the second defendant as an indication that the loan has been fully defrayed.

Under cross-examination by Olalekan Ojo (SAN), lawyer to the second defendant, the witness who stated that the documents tendered were generated from the electronic system of the CBN, said he was not personnel of the Information Technology (IT) department of the CBN.

While admitting that he does not know the defendants in the case, Osagie disclosed that his statement to the EFCC was made after the last court’s proceedings, adding that, “I thought I would just come and tender the documents before the court and go”.

The trial, however, has been adjourned to September 7, 8, 9, 10 and 11, 2020 for the continuation of cross-examination of the second prosecution witness.