Banjo out, Ezeigbo in as NLNG reconstitutes Literature Prize Board

Arts and Culture
By Akintayo Abodunrin On Mar 21, 2021 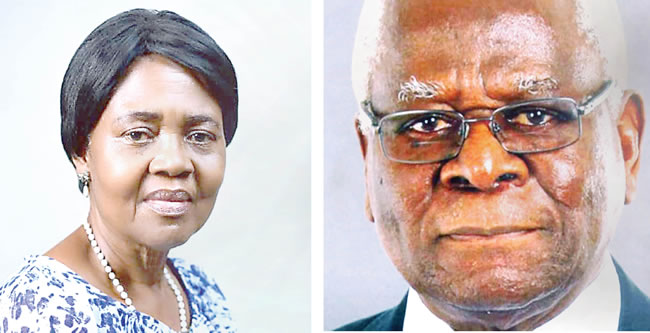 The Nigeria LNG, sponsors of the Nigeria Prize for Literature, continues the tradition of periodic innovations to the prize by reconstituting its Advisory Board.

AFTER almost 16 years of service as Chair, Advisory Board of the Nigeria Prize for Literature, the country’s biggest and most prestigious literary prize sponsored by the Nigeria LNG Limited, Emeritus Professor Ayo Banjo is taking a well-deserved break.

The former Vice-Chancellor of the University of Ibadan and eminent scholar has vacated the role for the Amazon, Professor AkachiAdimora Ezeigbo, a past winner of the prize worth $100,000.

Vacating the Advisory Board alongside Banjo, now Life Patron of the Literature and Criticism prizes, is Emeritus Professor Ben Elugbe and Professor Jerry Agada, who passed last year. The board’s change continues the NLNG’s tradition of adding periodic innovations to the prize to improve it further.

The changes in the Advisory Board’s composition and the unveiling of the 2021 jury were announced at a webinar on Wednesday, March 17. Joining Ezeigbo, the 2007 winner of the prize with Mama Mabel Segun, are Professors Olu Obafemi and Ahmed Yerima.

Playwright, poet and professor of English at the University of Ilorin, Obafemi is a past president of the Nigerian Academy of Letters and the Association of Nigerian Authors. The 2018 recipient of the Nigerian National Order of Merit was also Director of Research at the National Institute of Policy and Strategic Studies.

Prolific playwright, director, and 2006 laureate of the Nigeria Prize for Literature, Yerima is a former General Manager of the National Theatre/National Troupe of Nigeria. He is currently a professor of Theatre and Performing Arts at the Redeemer’s University.

Professor Toyin Jegede of the Department of English, University of Ibadan, will chair the jury to assess the 202 entries received for the Prize for Literature and four for the Literary Criticism Award. She is a Fellow of the British Council of Nigeria and Centre for Afro-American Studies, University of Coimbra, Portugal. She has also served as an international panellist for the Commonwealth Book Prize for Literature.

The other judges are Tanimu Abubakar, Professor of Literature in the Faculty of Art, Ahmadu Bello University, Zaria and Dr Solomon Azumurana, a Senior Lecturer in the Department of English, University of Lagos.

Speaking at the virtual event to introduce the new Advisory Board members and hand-over the entries for the 2021 prize to the jurors, NLNG’s General Manager, External Relations and Sustainable Development, EyonoFatayi-Williams, thanked the old Advisory Board members for their selfless service. She said the board oversaw the prize’s growth into Africa’s major literature competition, best known for its excellence and integrity principles.

Fatayi-Williams added that the Advisory Board’s change was geared towards making the prize’s governance framework and brand stronger. She further noted that the new members would bring an enormous wealth of experience to the award.

Fatayi-Williams, who acknowledged the impact of COVID-19 on the established process of the prize, said it also presented other opportunities on how literature can be marketed and consumed. She called on writers to seize the moment, stating that it was time to push out creative works as people spend more time at home, reading.

Commenting, the new Life Patron of the prizes, Professor Banjo, thanked the press for its keen interest in the award. He highlighted their contributions to its growth since its inception in 2004. He asked that they do not relent in their constructive engagements that will boost the growth of literature.

The new chair of the Advisory Board, Professor Ezeigbo, also expressed gratitude to the NLNG for the appointment. “We know we have a big task, and we are certain NLNG will stand behind us,” she said, adding of her predecessor, “Emeritus Professor Banjo is a man we all like and adore. He has performed excellently well, and his legacy will endure forever.”

Professor Ezeigbo added that excellence would be the watchword of the new Board. “We will maintain the highest standard set by the old board, and we will support the jury to ensure they do the right thing,” she said.

Like Banjo, she also acknowledged the media’s contributions to the prize’s growth, asking them to “continue with the constructive criticisms.”

Ezeigbo further described her fellow board members as accomplished scholars: “Professor Obafemi was one of the visionaries who wrote the prize proposal and took it to NLNG. I’m very proud of my team, and I’m certain we’ll deliver.”

The chair assured writers “that merit and excellence will determine the winner of the prize now and in the future.”

Recall that the COVID-19 pandemic caused the cancellation of the 2020 edition that would have been awarded for prose fiction. This year, it is repeated while the 2022 prize focused on poetry will begin in February 2022.