•Says citizens being pushed to self-help 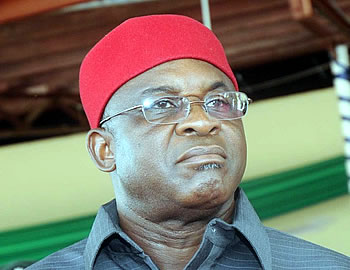 Governor Ortom’s convoy was reportedly  ambushed by gunmen suspected to be Fulani bandits along Tyo-MU Makurdi/Gboko road on Saturday.

The former Senate President in a statement signed by his media aide, Paul Mumeh, made available to newsmen in Abuja described security situation under the Muhammadu Buhari administration as scandalous and making Nigeria a subject of ridicule before other nations.

The former Senate President who incidentally is from Benue State cautioned that if the deteriorating security situation was not addressed, Nigerians might resort to self-help to secure themselves and their immediate environment.

He said:”If a state governor can be so brazenly attacked, what would they not do to the ordinary citizens.

“Let me state clearly that Benue people are receptive and accommodating. But this should not be misconstrued or mistaken for weakness. Enough of this malady.

“If our government and security operatives can no longer guarantee peoples’ safety in their homes, farms or places of business, I am worried that the situation may compel citizens to resort to self-help.

“That is the situation, we cannot contemplate and must not be allowed to happen because the consequences would be catastrophic.

“Therefore, the federal government and all the security agencies must of a necessity come to terms with the painful reality of the unabating insecurity in the land and resolve to end it.”

Senator Mark advised the Benue State governor “not to be deterred by the incident but should rather spur him to beef up security and welfare for the citizens of the state.”

He applauded Governor Ortom for what he called his fidelity to his oath of office to  defend and protect the lives and property of Benue people without compromise.

He further advised all citizens to be security conscious at all times just as he told them to provide useful information to security operatives of any suspected activity believed to be unlawful or anti-society.