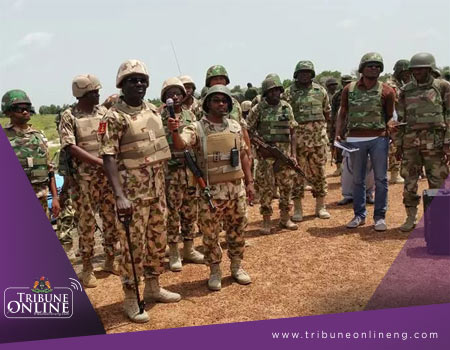 The Nigerian Army, under Operation Harbin Kunama II, has launched a health facility at Unguwar Rimi Bajju in Zangon Kataf Local Government and a solar-powered borehole at Dangoma in Jema’a Local Government.

The Chief of Army Staff, Lt-Gen. Tukur Buratai, who was represented at the launch by Maj-Gen. Pat Ekem, the Chief of Logistics, Army Headquarters, Abuja, said the gesture was to further cement the relationship between the military and the civil society.

Buratai said that apart from ensuring the safety of lives and property, the army deemed it fit to cater for the well-being of the citizenry, through the provision of amenities.

He urged the benefitting communities to jealously guard the projects against vandalism, for maximum benefit.

In their responses, the district head of Unguwar Rimi Bajju, Mr Daniel Aduak, said the facility would improve maternity care in the area.

He added, “Before now, our women travel to neighbouring Kafanchan to access medical care.”

Representative of the District Head of Dangoma, Malam Mamuda Suleiman, expressed gratitude to the Nigerian Army for showing significant concern to their plight.

He said, “Henceforth the community would no longer share the stream water with animals, thereby securing the general well-being of the people.”