Dapo Falade writes about the just-concluded Ariya Eko Music Festival and its induction of Evangelist Ebenezer Obey
into the Evergreen Music Hall of Fame. 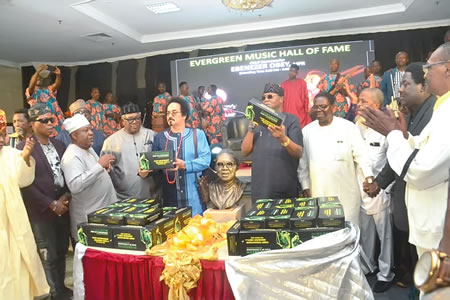 The dateline was Sunday, December 15, 2019 and the venue was the famous Lagos City Hall, Victoria Island. The event was the maiden edition of the Ariya Eko Music Festival, put together by the iconic Evergreen Music Company, the largest collectors of Nigerian, nay African indigenous music.

Speaking at a pre-event press conference held in Lagos some two weeks earlier, the managing director of the music company, Bimbo Esho, disclosed that the annual event was put together to recognise and celebrate the rich, vibrant and nostalgic musical culture and heritage of the people of Lagos State in particular and Nigerians in general.

According to her, it was “a bid to preserve some of our dying core indigenous music repertoire for the sake of posterity and also to show the world that we are a people that have musical roots, culture and identity. Our music dictates our mood and it is a reflection of our way of life.”

After months of vigorous planning and arrangement, the event, last Sunday, lived up to its billing. It was a gathering of who-is-who in the society, cutting across industry chiefs, top government officials, old and established personalities as well as young and upcoming artistes in the Nigerian entertainment and music industry.

The Ariya Eko was also put together to celebrate the legendary Juju music prodigy, Evangelist Ebenezer Fabiyi (aka Chief Obey Commander), a man who has, in a career spanning over six decades, churned out 660 songs which were well packaged in 80 compact discs by the Evergreen Music Company. He was inducted into the Evergreen Music Hall of Fame.

Miss Esho spoke on what informed the idea of the induction of Obey as she declared: “Chief Commander Ebenezer Obey has paid his dues in the area of music. With his music, he has touched many lives. He has been able to showcase our musical aesthetic (Juju Music) to the world. He has the largest music repertoire in Africa with about 660 songs. He is a worthy ambassador of our country hence we believe he must be curated for posterity and for children yet unborn; for students of history and for artistes who want to learn about good music.”

A mix of 20 old war horses and young and upcoming artistes cast aside their wide age differences and years of experience and came together to put up superlative performances, thrilling the audience with new and old tunes.

Obey Commander expressed his joy over the recognition. He lived up to his billing as a music legend as he sang some of his old tunes, including “Iba lo ye ka se”, “A njade lo loni Eledumare” and “Aimasiko lo n daamu eda”, to the admiration and listening pleasure of the gathering.

Unveiling the bust of Obey during the induction, Yemisi Shyllon declared: “This is a very important event to recognise one of the most important faces and legends of music, Chief Commander Ebenezer Obey. Music has transcended mere entertainment as it is now money spinner across the world. We must recognise the importance of music as a component part of the culture and identity of people.”

The various acts thereafter individually treated the audience to their types of music. Shina Peters rekindled the passion for his album, ACE, as he sang to the admiration of the audience. Obesere literally brought down the roof of the Lagos City Hall as he churned out some of his old but popular tracks. Jimi Solanke, who sang Tunji Oyelana’s “Mo lo s’oko”, could not leave the stage until he was forced to sing his “Baba Agba” folklore.

The last act of that night, Jesse King, also churned out various tunes from his first album, “BUGA” which was released some 14 years ago. The greatest revelation at the musical event was undoubtedly Helen Ibe whose electrifying wizardry on the guitar was simply out of this world. She held the audience spellbound as she played the popular Osita Osadebey’s “Osondi Owendi”.

Speaking with Friday Treat at the sideline of the event, Princess Adeola Ogunmola (aka Deola-Levite), the CEO of De-levites Generation Band, a gospel juju band, expressed satisfaction with the event as she declared: “The show is simply beautiful. It is a good effort at restoring originality back to our indigenous music. What we saw here today is a real effort by the various artistes on stage to bring out the best in them.”

The BUGA King also described the event as “a very big beginning. It actually shows the colour of who we are-our culture, language- and as a race. Indigenous music is a legacy. If we forget it, it is like we don’t have a future.

“I appreciate the organisers of this event, but we should have more of it. Ariya Eko should be made free-ticket in order for all lovers of good music to come in. By so doing, we would be expanding the scope of the concept and we will be more proud of it by making it an event for both the old and the young ones. It should be for all sectors of the people to enjoy.”

Religious freedom: Applause for the US?

Chisell ready to fire with ‘Medulla’