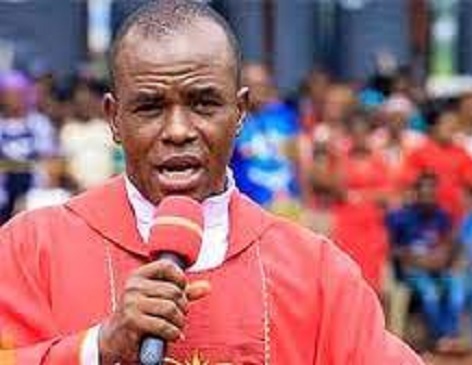 The spiritual director of Adoration Ministry, Rev Fr. Ejike Mbaka, has courted the anger of the ruling All Progressives Congress, (APC) over his demand for the resignation of President Muhammadu Buhari.

Mbaka who endorsed President Buhari in his first term bid and equally claimed providential endorsement for his fresh mandate in 2019 had accused the APC led administration of indifference and lack of capacity to address the security challenges facing the country.

Speaking in Enugu, he told his congregation that no civilised leader would remain in power with the spate of violence in the country.

Mbaka said: “How can people be dying and the chief security officer of the country would be sitting down without making any comment.

“Gunmen attacking people everywhere. Buhari should have resigned honourably following his (alleged) failure as a leader. Let me tell you that if it were in a civilised country, President Buhari would have resigned by now. So, it is amazing that he has chosen to sit tight while people are dying daily.”

Calling on the National Assembly to impeach the President, the Catholic priest submitted that Nigerians were facing intense poverty and insecurity.

He continued: “Nigerians are crying because there’s no security in the country. The National Assembly should impeach the President if he doesn’t resign.”

But APC Deputy National Publicity Secretary of the party, Yekini Nabena, cautioned Mbaka against making statements that could destabilise the country while alleging that the cleric was being used by desperate politicians.

Nabena described the stance of Mbaka as despicable as he noted that it was unfortunate for a man of God “who supposed to deploy all known spiritual means of averting crisis but rather threatening a democratically elected government for his own personal benefit while pretending to be speaking for the people.”

“One will wonder whom Father Mbaka is emulating because the Lord Jesus Christ did not threaten to bring down the government during his own time, in fact, Jesus Christ obeyed and honoured constituted authority. That’s why he paid his tax.

“We are calling on Father Mbaka to concentrate on his spiritual calling and stop speaking like politicians who it is obvious he (Mbaka) has been dining and wining with. If Mbaka has found another political ally, it is better to leave a political message for politicians.

“Calling on President Muhammadu Buhari to either resign or be impeached because of the current challenges is ungodly. Father Mbaka should not, however, take his luck too far because there is a lot to tell the Vatican and the Pope about his person and his sources of inspiration.”

Nabena further advised other clerics to emulate what he called the statesmanship of “the likes of Pastor Enoch Adejare Adeboye of the Redeemed Christian Church of God (RCCG) and Pastor WF Kumuyi of the Deeper Life Bible Ministry and many other true men of God who will rather fast and pray to avert the crisis in the country instead of threatening the government of the day.”

In spite of the huge investment in the water sector by the government and international organisations, water scarcity has grown to become a perennial nightmare for residents of Abeokuta, the Ogun State capital. This report x-rays the lives and experiences of residents in getting clean, potable and affordable water amidst the surge of COVID-19 cases in the state.  APC threatens to report Mbaka to Vatican, Pope over call for Buhari’s impeachment