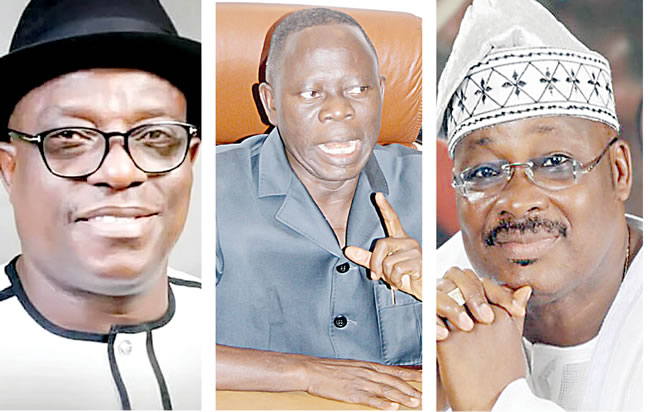 As the All Progressives Congress (APC) chieftains and ordinary faithful watch with bated breath the unfolding power game in the ruling party, there are indications that what is playing out is the battle for the party structures ahead 2023 Presidency.

A  Court of Appeal sitting in Abuja, last Tuesday, had upheld the suspension of the embattled national chairman of the party, Comrades Adams Oshiomhole.

In a unanimous judgment, a three-man panel of Justices of the court held that the appeal Oshiomhole lodged to challenge his suspension lacked merit.

Justice Mohammed Lamido, who delivered the lead verdict, dismissed the appeal and affirmed the decision of an Abuja High Court of Justice DanlamiSenchi, that earlier validated Oshiomhole’s suspension by his ward in Edo State.

The pronouncement of the appeal court culminated in the emergence of three acting national chairmen, on Wednesday.

The APC stalwarts include a former Oyo State governor, Senator AbiolaAjimobi, deputy national chairman (South); deputy national secretary, Victor Giadom is also  flaunting a court pronouncement,  proclaiming him as acting chairman and the national vice-chairman (South-South),  Hillard Eta, who is acting in the absence of the ailing Senator Ajimobi.

Nigerian Tribune investigation revealed that all the members of the fractured National Working Committee (NWC) of the party laying claim to the leadership of the party after the appellate court  judgment, which ousted Oshiomhole are proxies for certain tendencies determined to take control of the APC national secretariat, ahead two strategic events which will precede the 2023 general election.

The events are a national convention of the APC to elect a new set of national officers and the presidential convention where its candidate for the next general election will emerge.

The power blocs holding the APC by the jugular include governors elected on the platform of APC, some of who are nursing presidential ambition.

Those whose names have been mentioned but with strident denials by their media aides include: the governor of Ekiti State and chairman, the Nigerian Governors Forum (NGF), DrKayodeFayemi,   his Kaduna State counterpart,  Mallam Nasir El-Rufai and certain ministers in the cabinet of President MuhammaduBuhari.

There are speculations that they are against the alleged presidential ambition of a national leader of the party, Senator Bola Tinubu.

Further findings revealed that the camp of the governors are, however, divided, as some of them are said to be in league with Tinubu.

While the trio of Nasir El Rufai, KayodeFayemi and AtikuBagudu (governors of Kaduna, Ekiti and Kebbi states),   the latter influential chairmen of Nigerian Governors Forum and Progressives Governors Forum, lead the camp of anti-Oshiomhole-Ajimobi, Tinubu is said to have the ears of Kano State governor. Abdullahi Umar Ganduje, his Borno and Gombe state counterparts,  BabaganaZulum and  Mohammad InuwaYahaya in the North.

By implication, Senator Ajimobi is expected to assume the office in the absence of Comrade Oshiomhole.

But a party source told Nigerian Tribune that certain governors and chieftains in the South-West and their allies in the North are not comfortable with Senator Ajimobi, who has since been marked as a member of the Tinubu camp.

The party source hinted that apart from the embattled national chairman, the National Legal Adviser, TundeOgala, who incidentally is from Lagos, is believed to have sympathy for Tinubu.

The source noted that the Ondo State governor, RotimiAkeredolu and a; former Ogun State governor, Senator IbikunleAmosun are said to be backing the Ekiti State governor, DrFayemi in his agitation that Senator GbengaAluko is the anointed choice of Ekiti as replacement for the immediate past deputy national chairman (South), OtunbaNiyi Adebayo, the incumbent Minister of Trade and Investment.

According to the source, “The exit of Niyi Adebayo has stripped the Fayemi/ Amosun/ Akeredolu camp of any confidant at the party NWC,  thus their insistence on Senator Aluko. “

Findings revealed that a case challenging the nomination of Senator Ajimobi as replacement for Adebayo without the proclamation and endorsement of the South-West zonal congress is pending before the Federal High Court, Ado-Ekiti.

The state governor and his allies in the zone continue to squeal that Senator Ajimobi emergence was an imposition as it contravened Article 20 of the APC Constitution.

The section reads: “Unless otherwise provided for: a. All party posts prescribed or implied by this Constitution shall be filled by democratically conducted elections at the respective national convention or congress subject, where possible, to

consensus, provided that where a Candidate has emerged by consensus for an elective position, a vote of “yes” or “no” by ballot or voice shall be called, to ensure that it was not an imposition which could breed discontent and crisis.”

While the aspiration of the Minister of Transportation, RotimiAmaechi post-2023, remains hazy, his cold war with Comrade Oshiomhole and by extension, Tinubu camp is not in doubt.

Amaechi had pushed for the retention of the immediate past national chairman of the party, John OdigieOyegun to the disaffection of Tinubu and his anointed choice, Oshiomhole, prior to the June 2018 national convention that produced the former president of the Nigerian Labour Congress (NLC).

At a meeting of the chairmen of the South-South states of the APC held in Benin, City, the state capital, to endorse Oshiomhole, before the Abuja convention, only the Rivers State chairman staged a walkout.

It was a payback time last year, as Comrade Oshiomhole was accused of treating the alleged anti-party activities of Senator Magnus Abe with kid’s gloves in Rivers.

The latter was behind the several court actions and the eventual Justices pronouncements, which precluded the state chapter of the party from fielding candidates in the last general election.

Investigation revealed that Victor Giadom, who incidentally is from Rivers as Amaechi, is in said to be in league with forces working to supplant Oshiomhole and the interest he represents in APC.

A party source, who pleaded not to be named, however revealed that the Oshiomhole camp actually emboldened the South-South zonal chairman, Hillard Etta, to also proclaim himself acting chairman in the absence of Senator Ajimobi.  The Oshiomhole camp has since moved against Giadom as the new leadership of the party in Rivers State loyal to Senator Magnus Abe, at the weekend nominated WorguBoms, a former Commissioner for Justice and Attorney General of Rivers State as replacement for Victor Giadom whom they claimed resigned his position as deputy national secretary to contest election as running mate to Tonye Cole, in the last general election.

With three chairmen in one day,   the contending forces continue to push for the control of the APC national secretariat.

Ahead the Edo State governorship election, the faction of the party led by Honourable Etta has since announced Imo State governor, Senator Hope Uzodinma as chairman of the team to conduct the June 22 primaries.  Giadom faction has reversed the decision taken by Oshiomholewhile dismissing the disqualification of Edo governor, Godwin Obaseki and two others as nullity.

The silence from the Presidential Villa is deafening and a source of concern to staff at the Abuja secretariat of the ruling party.

A party source argued that only President MuhammaduBuhari could initiate the move for a meeting of a superior statutory organ of the party, the National Executive Committee (NEC). It is not clear if the President, who is the only one acknowledged by the constitution of the APC as Leader is in a hurry to initiate any trouble-shooting meeting.

A Presidency source noted that he had been disturbed that his appeal to the warring groups to save the party from imminent collapse at its last NEC meeting held in November 2019, fell on deaf ears.