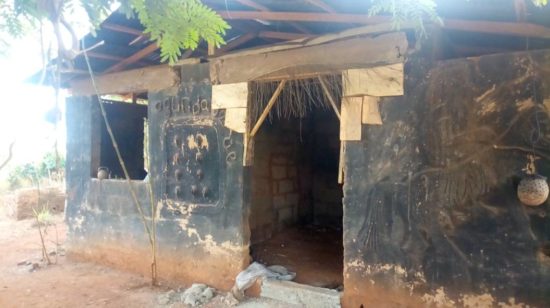 THERE was apprehension in Ilobu community of Irepodun local government area of Osun on Friday, following the shocking discovery of a ritualist den by the Police, where suspected shallow graves of victims, dungeon and shrines were located.

Tribune Online authoritatively gathered that the Police authorities were able to discover the ritualists’ den following a tip-off from members of the public. As of the time of filing this report, two brothers of the same parent have been arrested by the Police, while their kingpin had already escaped.

Osun State Commissioner of Police, Mr Fimihan Adeoye who led the contingent of security agents to the location confirmed to our correspondent that concerted efforts were ongoing to apprehend the fleeing kingpin and others involved in the nefarious acts, with a view to bringing them to book.

The ritualists’ den is located around Molete area of the community, spreading across a building, which accommodates many shrines and several adjoining houses, being used by the suspected ritualists for their deadly operations.

Addressing journalists at the scene of the crime, Adeoye said, “we acted on a reliable tip-off which led to the arrest two brothers of same parents, while their kingpin and leader is still at large.”

Findings indicated that there is a dungeon with the path, which connects shrines together, coupled with several statues and a sizable number of alcoholic bottles scattered around the shrines, while shallow graves dug by the suspects for their victims were also spotted, but the Police explained that investigation was still on over the ritualists’ den.

Speaking to journalists, some residents of Molete area, Ilobu, who pleaded anonymity said the discovery would allay their fears over the activities in the area.

Nigerian Army is not aware of Shekau’s whereabouts ―Spokesman