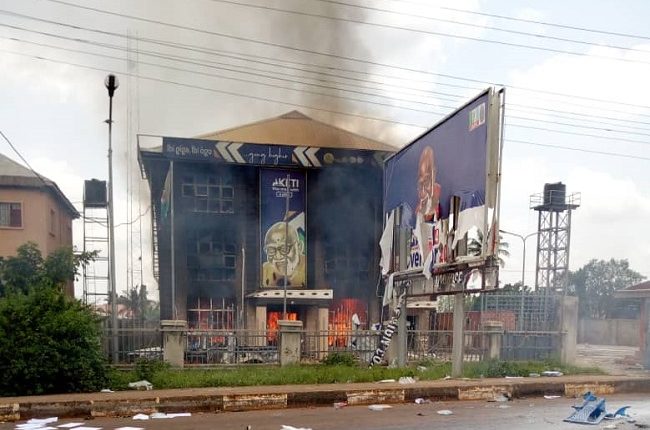 Protesting youths in Okitipupa town in Okitipupa Local Government Area of Ondo State, on Thursday allegedly set the Divisional Police Station in the town and the local government Council Secretariat on fire, releasing all the prisoners at the Correctional Service Center (Nigerian Prison) in the town.

Similarly,  the campaign office of Akeredolu located along Roadblock /Ilesha road has been set on fire by some hoodlums.

It was gathered that trouble started in Okitipupa when the security operatives in the town tried to enforce the curfew order declared by the state government and tried to send back protesters home.

Irked by the action of the police operatives, the youth regrouped and mobilised themselves and torched the police station before heading to the prison to release the inmates.

No fewer than 200 seized motorcycles and valuable properties at the Police Station were reportedly released to the public by the protesters in Okitipupa.

The house of one of the APC governorship aspirant. Mr Ife Oyedele was also burnt by the angry mob.

It was gathered that the protesters also moved to Igbokoda in Ilaje local government area and attempted to burn another police station but the Naval officials revelled the protesters from gaining entry into the station in Igbokoda.

A source within the community explained that the protesters were moving towards Agadagba in Ese Odo local government to destroy the Amnesty office while the militants were said to have organised themselves to build security against the protesters.

A leader of Arogbo Ijaw lamented over the wanton destruction of valuable properties by hoodlums who have highjacked the struggle against police brutality and unprofessional conduct from the peaceful youth protesters.

He said they have turned the protest to political war and some politicians have been fingered to be behind the attacks in the area.

He said “already, we are aware that some ZLP thugs under the guise of protests are mobilising to come to Agadagba obon to attack the Amnesty office here.

“But I can bet you, they won’t meet us here, we will meet them midway and we shall level the community of their sponsor who we know very well.

“We have tracked his conversations with the boys and we are watching. If anything happens to any Arogbo son or any property of our son or daughter, we shall give an equal response.

“We are part of Yoruba Ondo State but we are Ijaws and cannot be intimidated. If someone loses an election, this is not the first time, he should go and rest and not hide under a legitimate protest by the suffering youths to create tension. We know him. We shall go for him. He is spoiling for an ethnic war he will not survive.

As at the time of writing this report,  the youth are said to be moving towards the University of Technology in Okitipupa to destroy the school.

Attempts to speak with the Police Public Relations Officer were not successful.

#EndSARS: CAN frowns at killing of peaceful protesters, urges peace