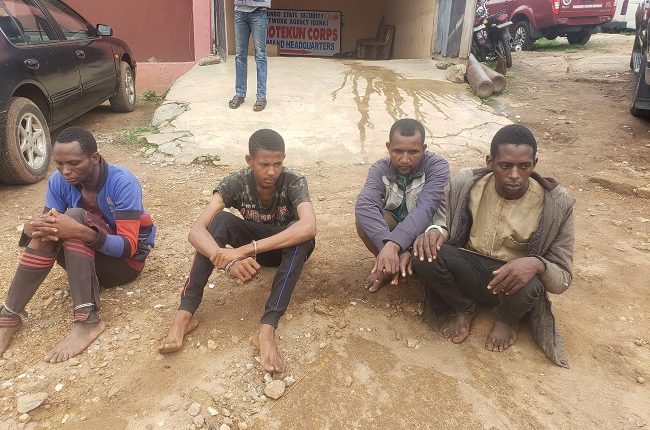 One of the four suspected kidnappers arrested by the Amotekun Corps, Usman Garuba, said he was lured into the kidnapping gang by the leader of the gang who promised to give him a job.

Garuba who was arrested with three other suspects which include, Yameri Muhammed, Umar Ali and Abubakar Sidiku, said he was desperately looking for a job when he was recruited into the group.

The 37-year-old man while narrating how he worked with the alleged kidnap gang before he was arrested, said he was arrested by the Amotekun corps in the course of collecting ransom.

According to him, he was introduced by a man he called his master who promised to give him a job but he was handed over to the leader of the kidnapping syndicate who took him out for operations.

He said: “It was my oga that brought me and told me there was a job for me. They promised to give me work and I was introduced to one man who I followed to the first kidnap job.

“We kidnapped the man and three of us got N100,000 from the job. We are working with some Yoruba people who usually bring job for us.”

Speaking on their last operation, “The Yoruba man told us about our target and said the man is rich. He described his house to us but we didn’t meet him. He couldn’t follow us because he said they know him in the area.

“When we were coming, it was raining, we met some four people at a bus stop and we kidnapped them so that we will not go back empty-handed.

“I want to beg for forgiveness and I promise not to go near this kidnapping business again, I know it is not good but I was introduced to the business because I needed to work and make money to feed myself. I never knew they are into kidnapping.”

Speaking on the arrest, the state Commander of Amotekun, Chief Adetunji Adeleye, explained that Garuba and others were arrested at the weekend after receiving a distress call.

He said kidnappers abducted four people who were taking shelter in a bus stop along Oba road in Akure South Local Government Area of the state but one of the victims escaped from them.

He explained that two of the victims were also rescued by the Amotekun Corps but the kidnappers reportedly changed location and held on to the remaining victim demanding a ransom.

He, however, said one Usman Garuba was arrested by Amotekun operatives in the course of collecting the money for the ransom, leading to the arrest of three others in their hideouts, while a female victim was rescued.

He disclosed that the suspected kidnappers raped one of the victims while two others were beaten blue-black during negotiations with their family.

Adeleye said the rescue mission was made possible with the assistance of other security agencies and said, “We were able to rescue two victims that same day but the kidnappers held onto to one.

“We sold a decoy of ransom payment to them and in the course of that we were able to nab one of them who led us to their hideouts and we arrested others.”

He said the four suspects would be handed over to the police for further interrogation and investigation.