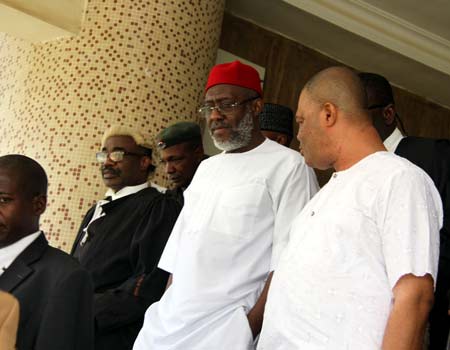 The Federal High Court, Abuja, has admitted into evidence, records of expenditure of the N400 million the former National Publicity Secretary of the Peoples Democratic Party (PDP), Olisa Metuh was alleged to have fraudulently received.

Metuh had testified that the N400 million was paid to him by former President Goodluck Jonathan for a special national assignment.

He had also testified that he disbursed the money under the directives of the former president, after which he also tendered account with receipts of payments to him.

Metuh who was led in evidence by his counsel, Abel Ozioko, at the resumed hearing on Tuesday, confirmed that no part of the N400 million was used for the campaign activities of the PDP.

He said it was exclusively used for the presidential special national assignment.

The records of account tendered by Metuh contained details of the disbursements and signatures of those who received funds in the execution of the said special national assignment.

Metuh further told the court that he had no dealings with an aide of the former vice president, Abba Dabo, the seventh prosecution witness, with regards to the special national assignment.

He explained that the N25 million he paid to Dabo was from the PDP for PDP activities and not from the N400 million.

“All the dealings I had with Dabo had nothing to do with the special national assignment.

“Nothing about Dabo was contained in the record of account submitted to the former president and there is no record of payment made to Dabo in the special national assignment,” Metuh said.

According to Metuh, I had previously testified in court that as National Publicity Secretary of the PDP, I usually make payment from my personal resources for party activities after which I get refunds from the party.

He drew the attention of the court to exhibit D11 tendered by the Head of PDP Publicity Directorate, Mrs Chinwe Nnorom.

The exhibit reflected a refund of N25 million to Metuh for the fund he paid to Dabo for a project he carried out for the party.

Metuh said he was shocked that Dabo did not ask him about the source of the N25 million refunded him by the party before refunding same to the Economic and Financial Crimes Commission, (EFCC).

Justice Abang adjourned the matter until April 10 for the continuation of trial.

Metuh is standing trial along with his company, Destra Investment Limited on a seven count charge which involves laundering $2 million.

He is also charged with fraudulently receiving N400 from a former National Security Adviser, Sambo Dasuki.