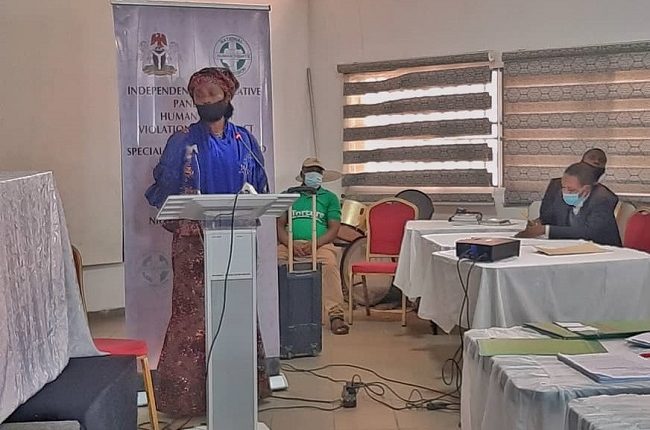 A petitioner, Joy Daniel, on Wednesday told the National Human Rights Commission (NHRC)’s independent investigative panel on violations of rights by defunct SARS and other police units that she wanted justice for his murdered brother.

Daniel had petitioned the panel, alleging the extrajudicial killing of Emmanuel Awulu against Inspector Cletus Atuma; officers of SARS; the Federal Capital Territory (FCT) Commissioner of Police and the Inspector-General of Police.

Testifying before the panel at the hearing of the petition, Daniel said her late brother, was arrested on Gwagwalada road on August 20, 2019.

She said all efforts made to see him by members of the family proved abortive as she and other family members kept going to police facility and not being allowed to see their brother.

According to her, “The most painful part was when my brother (Emmanuel) said he wanted to see my mother. They (police) refused her, she cried and could not see him.”

She said each time she went to see the deceased, the police always collected money and food she brought for him and would not allow her to see him, which got her angry at a point.

“I got angry because they (police) each time I visited collected both money and food which I brought for my brother without bringing him for me to see.

“I asked them of the offence he committed that made them not to allow me to see him. I told them that I have been coming here and can’t see him,” she said.

She alleged that police at a time told her that N200,000 was not enough to solve Emmanuel’s problem, adding that she called one of her brothers, Francis to relate this to him.

According to her, “my brother told me that Atuma said he should bring N4 million if not he will meet his brother dead.

“I started shouting and they (police) warned me that if Atuma meets me, I will be in trouble. They said that he is a difficult man and he is a small god in this place.”

The police personnel, she added, told her that they had not allowed her to see Emmanuel simply because Atuma had yet to give them instruction to do so.

“They said since he (Atuma) has not given them order to bring my brother out, they can’t do anything,” she alleged.

Daniel told the panel that on one of their numerous visit to the police station, the officers they met told them that their brother, who was under Atuma, had died in the cell.

“One of the police said the beating was too much and he (my brother ) cannot stand up, even two people can not carry him.

“We begged them to release him for us so that we can take him to the hospital and after treating him bring him back. He died because of the beaten they gave him,” she told the panel.

She, therefore, said the family wanted justice for the deceased, who she said was a promising and young poultry farmer.

“They (police) should compensate the family and justice should prevail,” she said, adding that those behind Emmanuel Awulu’s death should be brought to book.

“Those that killed my brother should be brought to book because it was too much,” she said.

Meanwhile, counsel for the respondents, Kenneth Ogbuchuwa, sought an adjournment to enable the police legal team to reach out to the first respondent, Atuma.

Based on this, the acting chairman, Garba Tentegi SAN, who presided over proceedings in the absence of the chairman, Justice Suleiman Galadima (retd) adjourned till March 17 for cross-examination.