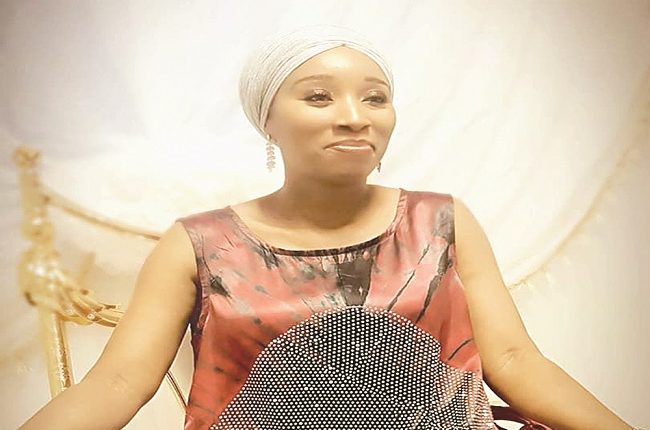 Princess Ronke Ademiluyi, great-granddaughter of Ooni Ajagun Ademiluyi, is the founder of the Africa Fashion Week London (AFWL) that promotes African heritage through fashion. Even with a background in Law, the cultural ambassador remains one of Nigeria’s bright exports in terms of culture and fashion. Speaking recently with ROTIMI IGE, she chronicles her adventure of documenting the African heritage through fashion.

How did the idea of the Aso-Oke project come about with the Kwara State first lady?

My organisation, the Africa Fashion Week London always highlights the importance of using our fashion to promote our cultural heritage, so I decided to collaborate with Her Excellency, the wife of the Kwara State governor, Yeye Aare Dr Folake Adbulrazaq to showcase the state’s local fabric, Aso Ofi, at the sustainable fashion week in New York, through a fashion film documentary.

In Nigeria and the diaspora, almost every occasion like weddings, coronations, inaugurations, funerals etc. involves wearing a piece of the Aso oke textile, but only a few people know how long this traditional textile has been around and its origin, so this documentary project with  Yeye Aare Adbulrazaq will give us an insight into Aso-Oke also known as Aso -Ofi in Kwara.

It will include particular designs how it defines the appearance of Yoruba people worldwide, interviews and questions of the tradition and knowledge of the production process by the weavers in the state, showing how the fabric is now being used outside of its primary market of Yoruba consumption and now a more global fashion statement.  Projects like this will help boost the careers of the weavers; it will help the weavers accelerate their business onto a bigger stage as African textile has influenced global fashion for years. The traditional textile weaving and resist dye industries can generate wealth and jobs if supported.

As a fashion stakeholder across international borders, what do you believe this project will add to Nigeria’s cultural tourism and Kwara State?

I believe in fashion tourism and always highlight how fashion can be used to promote Nigeria’s cultural tourism. In Africa and Nigeria, our textiles and fabrics mean a lot more to us than just a fashion statement, as it goes beyond the beautifully bold and bright colours. It allows us to tell history and stories behind the indigenous textiles of the communities that engage in it and the individuals involved in the various processes, the origin, the relevance and the importance.

The fashion documentary that Yeye Aare Adbulrazaq has engaged my organisation to show at the Sustainable Fashion Week New York will take us through the journey of local craftsmanship of the Aso-Ofi weaving in Kwara State and it will also showcase Kwara State to the world through fashion, including the weaving process and the weavers behind it, how it’s a family craft and various families pass it over to generations and this has sustained the relevance of the fabric for decades.

It will also highlight the process from the threading to the looming. The production process that goes into this will assist in promoting fashion tourism in Kwara State, and most importantly the social and economic impact to the state and Her Excellency’s intentions of making it accessible to a global audience.

Several states in Nigeria have several fashion-worthy products. Why Kwara?

We are kick-starting this particular project with Kwara State. However,  Africa Fashion Week works with various states across the country and our aim is to continuously exhibit traditional textiles from different parts of Nigeria and Africa, including how these textiles have evolved over the centuries. Africa has up to 3000 tribes and  Nigeria has over 300. Each tribe has its own culture of fashion.

As a Princess of the biggest tribe in Africa (the Yoruba tribe), I understand the importance of using our textiles to promote our culture and heritage.

In Africa, you can easily identify someone by the type of outfit they wear as we proudly showcase our culture in what we wear. We are kick-starting this project with Kwara State and we aim to replicate this in other states in the country because many traditional Nigerian textiles are in danger of disappearing. This can be associated with the production techniques which are labour-intensive and are time-consuming. It is also difficult to sustain traditional fabric producer projects like this. But I believe it will increase the exposure and possibility of venturing into mass production by the state governments which will, in turn, make it economically viable and survive the difficult economic circumstances.

When is the project likely to kick-off?

It will be shown virtually to a global audience on the 15th of September and its focus is to showcase Aso Ofi and how it’s made in Kwara State. Aso-Oke known as Aso-Ofi in Kwara is the legendary African handwoven textile.

Woven at the loom in Kwara State and located in the North-Central part of Nigeria, Ilorin in particular, our journey took us to Okelele and Ojuekun in Ilorin East local government areas, featuring a few compounds of the cloth weavers, like the Alabidun, Alaru and Adefalu compounds, and one of the head weavers Lawal Ibrahim Adefalu talked us through the history and process of the Aso Ofi and how even PhD holders are involved in this trade, it also features a young female graduate weaver, Sanni Abimbola Mujidat  and the curious questions she gets from people whenever she introduces herself as an Aso-Oke weaver.

It will include the weaving process that has been going on for centuries and how the woven cloth has been traded in the Kwara State from time immemorial, and people travel from far and wide to purchase the beautiful cloth, which varies from a simple weave to more sophisticated patterns. A variety of threads is used to weave the cloth which gives rise to the different names for the cloth woven.

Nigeria’s economy post-COVID-19 requires quite a bit of stimulation to become profitable. Do you believe this project can be the ticket to growing the nation’s economy if other states adopt and replicate it?

In the realm of fashion, projects like these can contribute immensely to our nation’s economy. Focusing on locally woven and resist dye textiles as a counterpoint to the imported fabrics can grow our economy rapidly. Each state across the nation have one or more indigenous textile and at Africa Fashion Week London and Nigeria, we are willing to collaborate with the states, creating relevant contents needed to promote their textile industry to a global audience.

Projects like these are very educational too as they educate the general public about the culture of the skilled artisans behind the textiles and how it is integral to our culture.

Politician, Others Offended By My Husband Should Forgive Him ― Adedibu’s Widow
Wife of the late strongman of Oyo State politics Alhaji Lamidi Ariyibi Adedibu, Alhaja Modinat Abosede Adedibu has come out to appeal to those he offended while alive to forgive him, as there is no human being that does not make mistakes. She also added that since he is now late, those who offended him too…African Fashion Week London  African Fashion Week London

CAMA Is Against Religious Institutions In Nigeria ―CUPP
The Coalition of United Political Parties (CUPP) on Wednesday said that the Companies and Allied Matters Act (CAMA) was being targeted at religious institutions in the country. Addressing newsmen in Abuja, the spokesman of CUPP, Ikenga Imo Ugochinyere said that it was also a plot by the Federal Government to have access to finance…African Fashion Week London African Fashion Week London