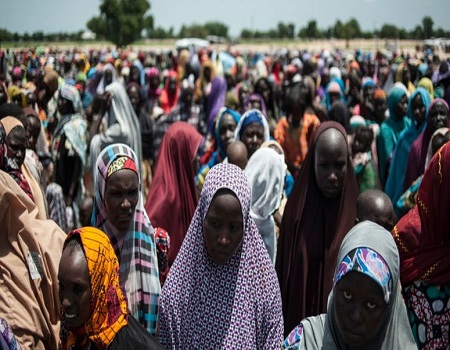 Share
The councillor representing Lafiya ward in Lamurde local government of Adamawa State, Abubakar Yahaya has disclosed that so far 978 people displaced by the Tingno communal crisis have registered at the Kupte primary school camp in Lafiya.
Yahaya who doubles as the camp chairman noted that they expect to register more IDPs as people are still coming to be registered.
He commended the Ahmadu Umaru Fintiri led government for its quick response towards taming the violence and the prompt assistance it rendered to the teeming IDPs in the areas of food, security and other vital needs.
He, however, noted that the IDPs need more shelter, beddings, mattresses, clothing materials and other consumables to make life a bit easier for them.
“We are grateful to the government for its quick and prompt response in providing aide to the teeming IDPs in the areas of food, drugs and other consumables.

” But because of the size of the IDPs, we are in need of more assistance in the areas of canopies, mattresses, beddings and even clothing to make life easier for them.
” Some of them have lost everything to the crisis and are beginning another phase of life from the scratch,” he said.
Also commenting, a health worker at the camp Magritte Obida said since the camp opened last Sunday, they have been working round the clock to ensure that some of the health challenges are minimized.
She noted that there is a high frequency of fever especially by children, cases of bleeding by pregnant women and other teething challenges noting that they have referred the more complex challenges to various hospitals in the area including general hospital Numan and the cottage hospital in Lamurde.
She noted that they need more drugs and equipment to handle the ever-increasing population calling on well-spirited individuals to come to their aide adding that so far, they have attended to 164 persons who came with various complaints.
She, however, made case for the provision of protective devices in view of the COVID-19 snare noting that there is a serious shortage of face masks in the camp.
Narrating their ordeal, one of the IDP leaders, Mohammed Auwal said so far, they have buried 42 people while 60 others who sustained injuries are currently receiving treatment.
He said the number of death could increase in due course as many people are still unaccounted for noting that the crisis has cost them all they laboured for in life.
In a chat with newsmen, the village head of Kupte, Chief Jonathan Alfred thanked Adamawa State government for its quick response calling on the people to embrace peace as he said no development can take place in a violent atmosphere.
Our reporter observed that women and children formed a majority of the camp’s population.

Benue to conduct LG poll this Saturday amidst COVID-19