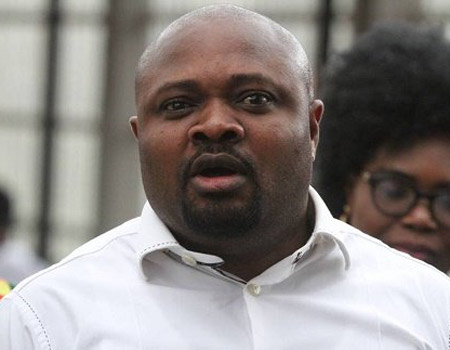 THE trial of Waripamo-owei Emmanuel Dudafa, a former Senior Special Adviser on Domestic Affairs to President Goodluck Jonathan, and two others, over alleged $15.5 million, which was earlier scheduled for Wednesday, was stalled due to the absence of the prosecution lawyers.

Standing trial alongside Dudafa are a lawyer, Amajuoyi Azubike Briggs, and a senior staff of Skye Bank, Adedamola Bolodeoku.

The defendants were facing fraud charge of $15.591,700 million, which the former Nigeria’s first lady, Mrs Patience Jonathan, is laying claim to.

In a letter, the Economic and Financial Crimes Commission (EFCC) asked for an adjournment due to a ‘national assignment’, outside the court’s jurisdiction.

Responding to the EFCC’s letter, Dudafa’s lawyer, Gboyega Oyewole, described the situation the defence met themselves as unfortunate, saying that if it was defendants that acted in such manner, the EFCC would have accused both the court and defence delaying the proceedings.

He said: “It is most unfortunate that the case is slated for trial today, but the prosecution has delayed it. If it’s defence, they would have gone to press and say court and defendants have delayed proceedings.

“Rotimi Oyedepo is not the only lawyer in EFCC. The commission has largest chamber in Nigeria. It is an unfortunate situation, and I urge the court not to grant the application,” he said.

Other defence counsels; Ige Asemudara and Jeff Kadri also aligned themselves with the submissions of the first defendant’s counsel, while also asking the court to dismiss the suit against their clients

Ruling on the defendants’ lawyers’ submissions, Justice Kuewumi said the court cannot dismiss the case on the application.

The judge said the prosecution has the duty to communicate the same letter to defence. He, however, adjourned the matter till September 13, for continuation of trial.

The EFCC, in a second amended charge marked FHC/337C/16, alleged that the three accused persons alongside the four companies, between November 13, 2013 and March 31, 2015, conspired with one Sombre Omeibi, who is now at large, to retain the sum of $15.591,700, which they ought to have known forms part of the proceeds of an unlawful act, and thereby committed offences bordering on money laundering and stealing,