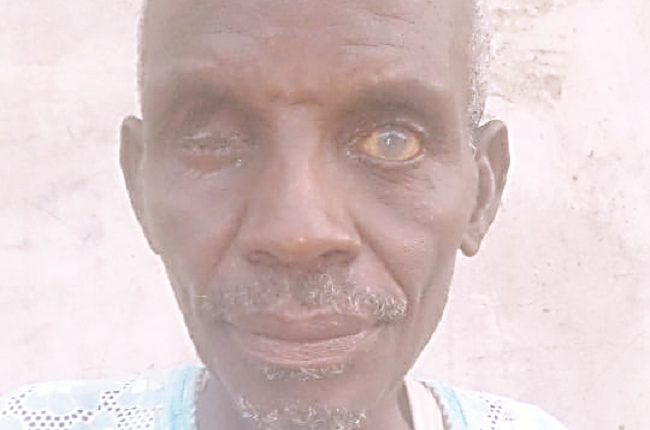 Oluwabamisegun Abraham, a resident of Ikumopayi Olodo in Egbeda Local Government Area of Oyo State, was, until life took a painful downside, a proud family man. He was contented and forward-looking.

Abraham worked as a rock blaster. On the day of the incident, he went to one of the sites where he had been paid to carry out a rock blasting project. Unfortunately for him, the dynamite, which is one of the explosives used, was not completely removed, leading into a terrible explosion.

The explosion caused some rock fragments to fly around and some got into his eyes and body in the process, thereby resulting in partial blindness. While looking for an escape route, he fell back into the well and broke his back.

“The dynamite stuck in the rock was not completely removed before we started working on that day. So when I struck the rock with metal, there was a terrible explosion. Rock fragments went flying everywhere. Some got in my body and some in my eyes. I got partially blind from the explosion.

“While moving out of the well in severe pain, I also tripped and fell back into the well again, thereby hurting my back terribly. This led me into having a hunched back when the pains became unbearable,” he said.

Abraham explained that after the accident, he was able to undergo surgery at the University Teaching Hospital (UCH) where about eight rock fragments were removed from different parts of his body.

“The incident happened during Dr Lam Adesina’s regime as the governor of Oyo State. After the incident, I went to the University Teaching Hospital (UCH) for treatment. They were able to remove up to eight fragments from my body at the hospital,” he said.

The fragments were not completely removed from his body and this has resulted in recurring pain in his eyes, back and other parts of his body.

“The ones that are left are really a source of concern because they hurt a lot. Recently, I went to the hospital again to complain about the recurring pain in my back and eyes. I was told to bring a sum of five million naira to fix my back. I have been spending a lot since this unfortunate incident happened. The hospital said I should come as early as possible to have my back fixed,” he said.

Narrating his ordeal to the Nigeria Tribune, the father of six said he has used up all his savings in the treatment and in his quest to live a normal, healthy life, he has been unable to perform his duties as the head of his family.

“I want Nigerians to assist me so I can live a healthy life. I have used up all I have in the treatment and my quest to live a normal healthy life. Unfortunately, my wife who has been assisting me by providing for our family also had an accident while discharging her duties as a sanitation worker. Her legs were broken but now she is gradually getting back on her feet,” he said.

The survival of Oluwabamisegun Abraham and his family depends on the efforts of kind-hearted people now.

For enquiries and assistance, Abraham can be reached on his mobile number 08066361926. Financial assistance can be sent to the following bank account details: Olojede Iyanuoluwa Motilayo, United Bank of Africa, account number 2141196866.

Mother of one requires N700,000 to undergo uterine, cervical surgery