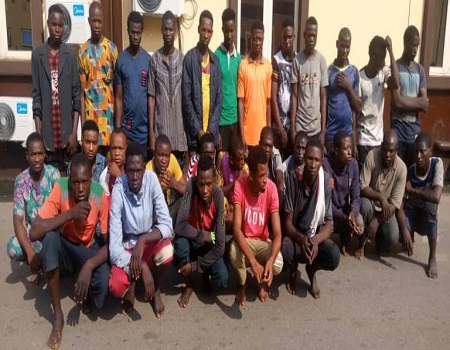 Lagos State Environmental and Special Offences (Enforcement) Unit (Task Force) have confirmed arrest of 46 Okada riders, following attacks carried out on its enforcement team during which a paramilitary officer, Mr Innocent Okoro, was wounded and operational vehicles damaged, in Oshodi area of the state.

Task Force Chairman, CSP Yinka Egbeyemi said this in a statement made available to newsmen on Thursday by the agency’s spokesperson, Mr Taofiq Adebayo, disclosing that 14 “illegal” commercial motorcyclists had carried out the said attack on its officials under Oshodi bridge.

According to Egbeyemi, 18 out of the 46 arrested suspects were released after a thorough screening, saying that the State Commissioner of Police, CP Hakeem Odumosu, had directed that the remaining 28 be prosecuted.

“Out of these 46 arrested suspects, 18 were released after a thorough screening and the Lagos State Commissioner of Police CP Hakeem Odumosu directed that the remaining 28 be prosecuted,” he said.

CSP Egbeyemi disclosed further that immediately after the attack, the investigation revealed that “these 14 illegal motorcyclists ran into a compound at Igbehinadun Street around Oshodi and locked themselves up.”

According to him, “The enforcement team with the support of other officials coming from enforcement operations at Lagos Island chased them and broke the entrance door of the compound and discovered a large number of motorcyclists and miscreants smoking Indian hemp within a residential house.”

While confirming the arrest, Egbeyemi urged all motorcyclists and road users across the state to operate within the ambit of the law, restating the determination of the agency to ensure that all residents in the state comply with the Lagos State Road Traffic Law of 2012.