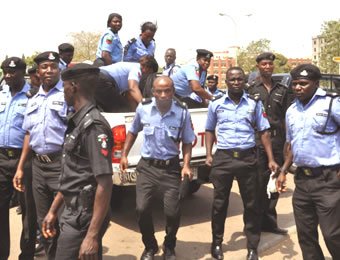 A 44-year-old Mechanic, Rafiu Akinleye, was brought before a Yaba Chief Magistrates’ Court in Lagos for allegedly assaulting a police officer on duty.

Akinleye, a resident of Gbagada area of Lagos is facing a count charge of assault on a police officer.

The defendant, however, pleaded not guilty to the charge.

The Prosecutor, Sgt. Modupe Olaluwoye told the court that the defendant committed the offence at 8 a.m. on Dec. 1, at No. 6, Church St., Ifako-Gbagada, Lagos.

According to her, a Police officer, Insp. Idara Atai, who was attached to Ifako Police Station, had gone to the defendant’s house to invite him for questioning on a petition that was written against him.

Olaluwoye alleged that once the defendant saw the officer, he began to push and drag the officer out of the compound; causing serious bodily harm to him and destroying the buttons on his uniform.

The offence contravenes Section 174 (b) of the Criminal Laws of Lagos State, 2015 (Revised).

Section 174 (b) stipulates three years imprisonment for the offence of assaulting a police officer executing his duty.

Chief Magistrate Oluwatoyin Oghere admitted the defendant to bail in the sum of N50,000 with two sureties in like sum.

She further directed that the sureties must be residing within the court’s jurisdiction and be gainfully employed with an evidence of three years’ tax payment to Lagos State Government.

Man who killed his father to die by hanging, Bauchi High Court rules

Environmentalists mull legal suit against FG over soot in Rivers