Brands and Marketing
By Tribune Online On Jun 20, 2016 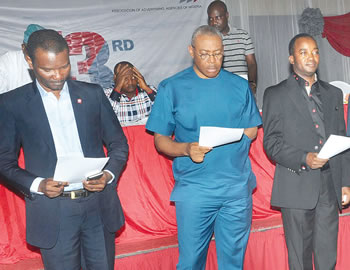 From the theme of the recently -concluded 2016 edition of its Annual General Meeting and the  focus of the welcome remarks by its outgoing President, Mr Kelechi Nwosu, it was clear that the Association of Advertising Agencies of Nigeria (AAAN) had gathered its members in Uyo, Akwa Ibom State to devise strategies that would enhance its relevance and aid its push for vantage space for the engagement of its services and those of its member agencies by government at various levels in the unfolding socio-political environment being created by the Muhammadu Buhari Administration.

While participants at the conference segment dissected government’s communications mechanism and proffered a way forward on how best to market Nigeria’s beautiful attributes and potential, Nwosu observed that the conference was organised to articulate options and identify strategies for addressing national issues, particularly those that relate to the advertising industry and the Nigerian economy, by suggesting clear ideas on how government can effectively engage the hearts and minds of Nigerians through the services of AAAN and its member agencies.

“Our request is that the Federal Government and state governments should all employ the services of AAAN agencies because we have built solid brands in this country; we are experts in strategic communication and most importantly the regulating law of APCON is clear that only licensed Agencies should practice advertising in the country,” he stated boldly.

The brilliant dissections as well as the loud and bold proclamations from the conference segment notwithstanding, the greatest and most important message from the AAAN Uyo Convention was the Association’s demonstration of a readiness to reposition for greater effectiveness. This resolve was conveyed in two major decisions reached by members.

First was the review of renewable tenure of Exco from one year to two years. This has been described by most members as a strategic move by the Association to ensure that each administration to be put in place henceforth has reasonable time to birth and nurture landmark projects conceived by them, before yielding the stage for another.

Today, the association has several landmark developmental projects languishing at various stages of non-completion. It has often been argued by members that no meaningful development could be achieved by an Exco whose tenure is just one year or, if renewed, two years, since project design and implementation requires long gestation period.

Given the biting economic and financial environment which has compelled organisations in the country to embark on strategic financial and non-financial re-engineering in order to remain effective, AAAN, going into the Uyo Convention, was expected to pay special attention to the constitution of a new Exco, particularly who emerges as the association’s Treasurer, since the post constitutes the totem on which the secretariat and the entire association’s performance rest.

In addition to picking Mr Kayode Oluwashona, the chief executive of Harmonee Concepts and Mr Ikechi Odibo, MD, DDB Lagos, as President and Vice President respectively, AAAN did not settle for less quality when its members unanimously voted Mr Wale Akintunde, the current Chief Operating Officer of Centre-spread Advertising, to occupy the position of Treasurer for the next two years.

If the choice of Oluwashona and Odibo can be described as correct appointments, given their well-known frontline positions in the Marketing Communications industry, Akintunde, a self-effacing but highly tested change agent with nearly two decades experience spanning client servicing, finance and administration, human resources management as well as general management has emerged a clear testament to the depth of untapped talents within the association.

Credited with masterminding the re-emergence of Centre-spread as a strong industry player on the heel of a three year period of turbulence that nearly crippled the giant advertising agency, Akintunde brings to the AAAN Treasurer’s office, a string of academic and professional qualifications that perhaps makes him the most qualified occupant of the treasurer’s post in the entire history of the association to date.

A cross section of industry watchers have noted that, in its choice of the officials to run its affairs for the next two years as well as the upward review of Exco tenure, AAAN may have begun a pragmatic journey of repositioning, aimed at addressing major issues that have plagued it for a while. Some analysts said for long, member agencies have often complained of not deriving any tangible membership benefits, thereby affecting their commitment to the association. The new Exco, they opined, is better placed to begin to address this complaint by devising sound financial and non-financial strategies to pursue projects that could bring immediate benefits to members in the area of business management strategy consulting, talent development and opening of business frontiers to assist especially small and medium agencies to survive the harsh business environment.

The Eighth N/Assembly: One year on