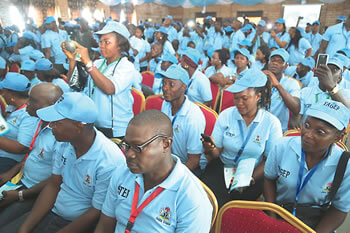 No fewer than 41 new entrepreneurs have been made in Delta State by the state government under its Skills Training and Entrepreneurship Programme (STEP) and the Youth Agricultural Entrepreneur Programmes (YAGEP).

The beneficiaries, who were  trained in tailoring, photography, welding and fabrication, electrical Installation and repairs,  at various vocational centres across the state  were later  provided with starter packs.

Nigerian Tribune gathered that with this development, the state government had completed its 2018/2019 programme, bringing the total number of beneficiaries to 4,274 in four years.

Addressing the beneficiaries shortly before the starter packs were handed over to them, the Commissioner for Youth Development, Mr Ifeanyi Egwunyenga, lauded the consistency of STEP and YAGEP, stressing that it had changed the narrative associated with government empowerment programmes in the state.

While urging them to think outside the box by investing in themselves and  developing their skills to enable them become the face of the programme in years to come, the commissioner advised them to have a mindset reorientation so as to succeed in their chosen enterprises.

Earlier, the Chief Job and Wealth Creation Officer, Professor Eric Eboh, had congratulated beneficiaries on the successful completion of the training, charging them to remain focused and determined to sustain their enterprises.

Eboh noted that the new batch of business owners were the first to embark on Post Training Proficiency Test (PTPT) to qualify for establishment with starter packs.

He disclosed that only beneficiaries who were successful in the PTPT were given starter packs.

NNPC GMD, DPR director, others to speak at NAEC Conference