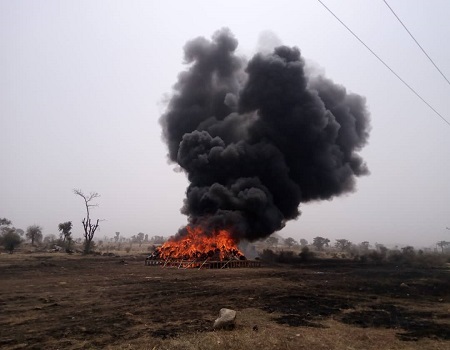 While giving a  breakdown of the drugs before setting them on fire for destruction, the NDLEA disclosed that they include cannabis 6,666.852 kilogrammes, cough syrup containing codeine, 7,011.865 kilogrammes and tramadol 1,883.914 kilogrammes.

While speaking at the public destruction of the exhibits at a brief ceremony held at Gida Daya, Dungal Village, along Bauchi-Jos road, the Chairman and Chief Executive of the NDLEA, Col. Muhammad Abdallah, said that it is frightening that such quantity of drugs could be seized compared to the population of the state.

Muhammad Abdalla, who was represented by his Chief of staff, Barrister Oluruntunba Femi said: “In our operation in the Northeast, we have seen drug as an energiser of insurgency and terrorism. The military has continued to seize various types of drugs in many of the terrorist camps they have been taken over. Drugs and violence are mutually inclusive and reinforcing”.

The NDLEA Chief Executive added that “The prevalence of pharmaceutical drugs of prescription and the rampancy of abuse among youth and women is worrisome. While these drugs may appear less injurious, they are as harmful as cocaine, heroin and cannabis Sativa”.

Muhammad Abdallah who said that the NDLEA is on top of the challenges posed by the trafficking and abuse of these pharmaceutical drugs of abuse, therefore, called on the public to join the agency “to put down this drug scourge ravaging our communities.”

He further noted that the NDLEA and Bauchi State have enjoyed long-standing cooperation in addressing the menace of drugs stating that the state government has been supportive of the agency’s onslaught on the drug criminals.

“Permit to particularly appreciate the personal commitment of His Excellency, Senator Bala Mohammed who has ensured the success of our anti-drug programmes and other efforts aimed at stamping out the drug menace. Drugs abuse and illicit drug trafficking are neither a respecter of persons, age, religion, social class and race. We are vulnerable, hence the need for concerted efforts by all stakeholders to address the scourge,” the NDLEA Chief Executive said.

In his remarks, Bauchi State Governor, Sen Bala Mohammed said that the destruction of the illicit drugs in the state should serve as a lesson to the dealers who have invested heavily in illegitimate drug business.

He said: “No nation is immune to the devastating problem of drug abuse had trafficking. As a government o the people’s, we must, therefore, continue to  demonstrate concern over the problem of drug-related crimes.”

Bala Mohammed who was represented by his Deputy, Senator Baba Tela, lamented the effects of drug abuse to include road accidents, learning disabilities, mental health problems family disruptions and general interference with normal reproductive functions and long term damages to the brain, heart, lungs, liver and other organs.

He therefore commended the NDLEA in collaboration with the judiciary for organising the public destruction reiterating it will serve as deterrent to all those involved in illegal drugs business.

Earlier in his welcome address, Bauchi State Commander of the NDLEA, Segun Oke, lamented that the illicit drugs are the root causes of crimes in the society.

He said: “All these drugs are mostly the base of most crimes, prostitution, armed robbery, kidnapping and general insecurity in the state and the country at large.

He added that, “It is of utmost importance to do this public destruction of seized drug exhibit to send a message out that we collectively take a stance against the scourge of illicit drugs in our society.”

Segun Oke solicited the support of key stakeholders in the area of confidential information in the war against drug abuse and trafficking saying the NDLEA cannot do it alone.

The last time public such public destruction of seized illicit drugs took place in Bauchi State was far back in 2010 during the leadership of Adamu Giade as the Chief Executive officer of NDLEA.