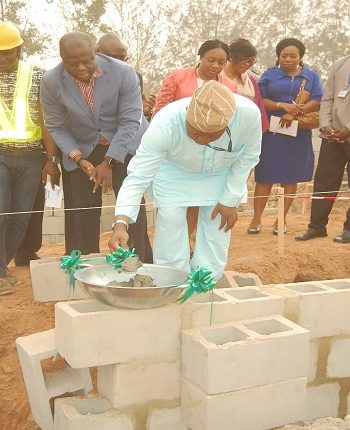 Speaking with the Tribune Online, Mr Olarinde, a Maryland, US-based real estate developer, said the hostel accommodation which will contain 1, 500-bed spaces, was the most ambitious hostel project in any university in the country.

On what informed the project, he said the Nigerian universities have experienced a significant rise in student enrolments over the past decades and with massive potential to increase in population, even as the population was matched by a corresponding growth in accommodation and the available ones have not been properly managed.

According to him, figures from the National Universities Commission (NUC) indicated that the provision of student housing was less than 30 per cent of demand, even as the vast majority of students were not properly provided for.

“Here in our great university, which is the first and the best, we have over 28, 000 student but less than 10,000-bed spaces. The university has tried various mechanisms to cope with the problem of accommodation for the students, but the accommodation machinery has been overloaded.

“We at ET do have a burden and a vision to be part of solving this problem our educational sector is witnessing. This hostel would complement our efforts to provide an environment conducive to learning and living for our students, at affordable prices.”

Olarinde said the student apartment complex, which would be built with personal fund and loans from banks, would be in phases and the estimate of the first phase which would be completed in two years, adding that it would be on Build-Operate-and-Transfer (BOT) basis for 25 years before the building would be finally handed over to the authorities of the University of Ibadan.

The accommodation project, handled by the Executive Talents, he said, would consist of “500 very spacious, airy and bright rooms, and, at least, 1500 bed spaces housing both male and female students. The rooms are available with and without AC as needed, furnished with beds, closet, tables, chair, fans and light fixtures. Kitchen with modern cooking facilities is also provided.

“It would consist of 20 per cent single occupancy; 40 per cent double occupancy; 30 per cent three occupancies and 10 per cent four occupancies. The facilities in the complex include reading rooms, indoor and outdoor common/social areas, parking lots, gym and laundry.

“Talents Apartments will cater specifically to international students wishing to study in this great university. We will have an international student wing aimed at achieving this. Student safety is paramount to parents and the university alike, hence we will provide the following: CCTV in all common areas, card reader access for entry, pound-the-clock security personnel.

“At Talents Apartments, we know that electricity is not a luxury but a necessity in the life of every student hence we are providing 24-hour hybrid power system- public, solar and generator to ensure student concentrate on one thing namely, studying.”

Olarinde further said clean drinking water would be made available for the student-occupants of the hostel, adding: “We will put in place a water filtration system that guarantees safe potable water to all residents on a regular consistent basis.”

He also said a food court would be provided with five different restaurant spaces to provide diverse food options and variety for the student population, assuring that the students would have easy access to shops that would provide their day-to-day needs.

Speaking at the groundbreaking ceremony of the students’ accommodation complex, Vice-Chancellor of the University of Ibadan, Professor Olayinka, described the Public-Private Partnership (PPP) project as a win-win situation for both the developer and the institution.

“We do pray for an improved economy in order to be able to address the problem of inadequate accommodation on our university campus. This would enable students to have better accommodation.

“I pray that the developer would have enough resources to build and complete the project and also up to the expected standard. It is a nice idea and I hope that it would be profitable for all concerned as people are into the business to make money and to sustain the business.