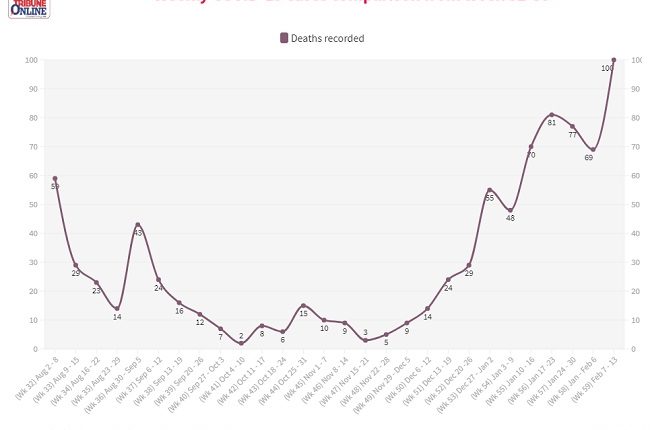 The data also showed that the tally of 100 deaths last week shows there is a sharp increase when compared to the 69 deaths recorded in the previous week.

The Presidential Task Force (PTF) on the COVID-19 pandemic, during the last briefing, explained that at least 13 cases of the new strain of COVID-19 first reported in South Africa and the United Kingdom (UK) have been found in Nigeria.

The chairman, Boss Mustapha, said at least six of the cases were discovered in the last one week.

“Testing is still being aggressively pursued as a viable strategy and the PTF shall continue to appeal to not just the citizens to get tested but call on sub-national entities to ensure that capacity of the laboratories that have been established within their jurisdictions be fully maximised,” he said.

Last week’s record of 6,422 cases show the cases reduced when compared to the 8,685 cases recorded in the previous week, January 31 and February 6.

Also, a total of 7,842 people recovered from the virus and were discharged last week compared to the 8,845 persons discharged in the previous week which shows there is a reduction.

Data from the Nigeria Centre for Disease Control (NCDC) showed that 78,220 tests were conducted last week, this is coming after the agency did not publish the number of tests carried out the previous week.

The country has tested 1,398,630 samples out of which 145,664 cases have been confirmed, a total of 120,399 patients have been discharged after treatment, and currently, there are 23,518 patients in various isolation centres across the country while 1,747 deaths were recorded.

On Sunday, 506 new cases of COVID-19 were reported in the country, bringing the total number of confirmed cases to 139,748.

On Wednesday, 1,131 new cases of COVID-19 were reported in the country.

On Thursday, 938 new cases were reported in Nigeria.

On Friday, 1,005 new cases of the pandemic were recorded.

On Saturday, 1,143 new cases were reported in Nigeria, bringing the total number of confirmed cases to 145,664.

However, Nigeria recorded fewer COVID-19 infections and deaths when compared to the previous week. It also recorded increased recoveries during the same period…100 Nigerians die of COVID-19 complications in seven days

AK-47 for herders: Bauchi governor defends self, says he was misunderstood

Terrorists stopped from setting up in FCT ―​​ Minister