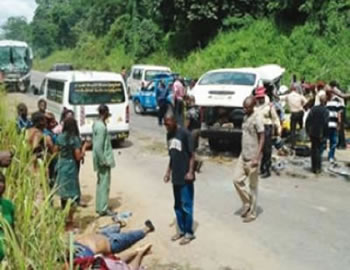 Mr Samuel Odukoya, Edo Sector Commander of the Federal Road Safety Corps (FRSC), said one person died and 26 others were injured in five road crashes in the state during the Eid-el-Fitri holiday.

Odukoya told the News Agency of Nigeria (NAN) in Benin on Friday that the accident which led to the death of a male adult was caused by speeding and happened along the Benin-Ore Expressway on July 7.

“We started our Sallah special patrol on July 3 and it is expected to end on July 10, so as to ensure an accident-free Sallah break.

“510 officers and men of the command in Edo and 650 Special Marshals were deployed for the Sallah special patrol.

“Also, 23 patrol cars, three ambulances, one motorbike and one tow truck were also released for the patrol,” he said.