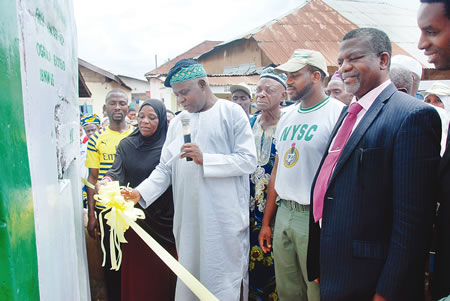 Speaking at the inauguration of the project recently, the state coordinator of the NYSC, Mrs Ifeoma Anidobi, represented by Assistant Director, Community Development Services, NYSC, Hajia Aisha Mohammed, said the rehabilited borehole was done in accordance with the secondary assignment of the NYSC.

Anidobi said the secondary assignment, which is community development service, is done side by side with the primary assignment, adding that a day is set aside in a week for corps members to impact their communities.
Commending Awopegba for the gesture, she said: “We tell them, go to your community and ask what they need, interact with them. Now, see what he has done. We are very proud of you.”

While thanking leaders of the community for giving him the opportunity to actualise the project, Anidobi also appealed to them to take care of the project so that it would serve the purpose of alleviating the problem of water shortage in the community.

Caretaker chairman, Ibadan North-West Local Government Area, Alhaji Bosun Ajuwon, who echoed the importance of water to human existence at the event, added that the borehole project is one of the projects for execution by the corps member as part of his secondary assignment for community development under the NYSC.
He enjoined the community members to protect the project from being vandalised.

In his goodwill message on the occasion, Oyo State Commissioner for Youths and Sports, Mr Abayomi Oke, praised Awopegba for the project, just as he expressed appreciation to the community leaders for their approval of the project.

Awopegba told the Nigerian Tribune, that he picked Oganla for the secondary assignment because the community had been without water for the past four-and-a-half year.

Why Awolowo did not make West to secede