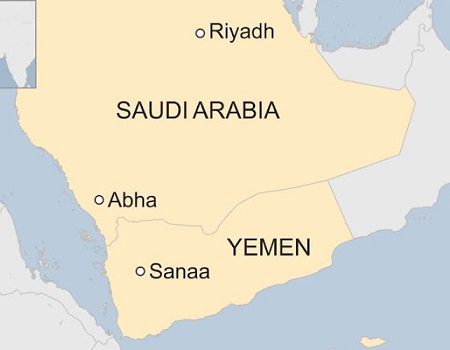 At least 26 civilians have been injured in a missile attack by Yemen’s rebel Houthi movement on an airport in south-western Saudi Arabia, state media say.

Three women and two children were among those hurt when the missile struck Abha airport early on Wednesday, a military spokesman was quoted as saying.

A rebel source had earlier claimed that the facility was hit “with precision”.

Saudi Arabia leads a coalition of Arab states backing Yemen’s government in its four-year war with the Houthis.

Yemen has been devastated by a conflict that escalated in March 2015, when the rebels seized control of much of the west of the country and forced President Abdrabbuh Mansour Hadi to flee abroad.

Alarmed by the rise of a group they believed to be backed militarily by regional Shia power Iran, Saudi Arabia, and eight other mostly Sunni Arab states began an air campaign aimed at restoring Mr Hadi’s government.

Three women – one Yemeni, one Indian and one Saudi – and two Saudi children are among those hurt.

Eight people were taken to hospital after suffering moderate injuries, while 18 others were treated at the scene for minor injuries.

Col Maliki said the attack on a civilian airport, which is about 200km (125 miles) north of the border with Yemen, was a serious violation of international humanitarian law and that it might constitute a war crime.

The coalition would “take urgent and timely measures to deter this terrorist militia, and to ensure the protection of civilians and civilian objects”, he added.

Col Maliki said work was underway to identify the type of missile involved, but Houthi-run Al-Masirah TV cited a rebel source as saying it was a cruise missile.

“The latest US systems were unable to stop the missile. This strike hit the enemy with panic and fear and caused great confusion in their ranks,” the source added.

Al-Masirah said it was the second time the Houthis had fired a cruise missile. The first reportedly targeted a nuclear power plant in Abu Dhabi, in the United Arab Emirates, in December 2017.

Earlier this week, a Houthi military spokesman said it would target every airport in Saudi Arabia and that the coming days would reveal “big surprises”.

Profile of new Speaker of House of Representatives, Femi Gbajabiamila