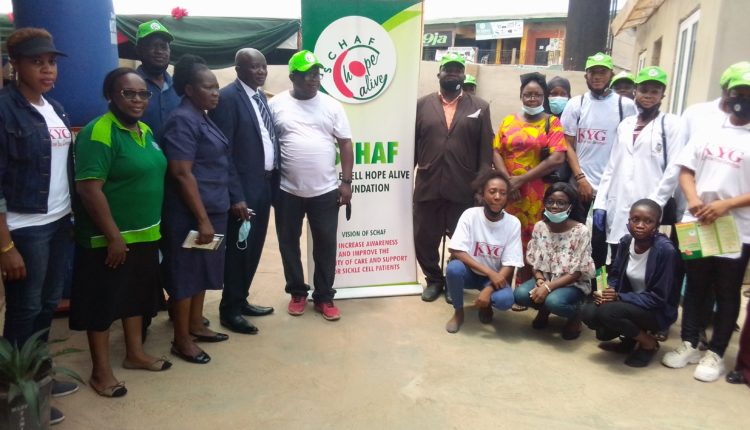 Dr Taiwo Aderemi, Community coordinator,  Sickle Cell  Hope Alive  Foundation (SCHAF) in Nigeria , has   called on Nigerian Government and all the federal and state teaching hospitals in the country to give more attention to people living with sickle cell disease  by investing in  research  and facility to do bone marrow transplant in  Nigeria and to make same available and assessable to every  sickle cell patients in the country.

Dr Aderemi gave the piece of advice on Thursday  at know your genotype  awareness and sensitization programme organized by the Sickle Cell Hope Alive Foundation to mark this year’s world Sickle  Cell   Day in Nigeria, held in Oyo State.

According to him, if Nigerian Government would consider the investment in bone marrow transplant research and subsidise it for the needy people for easy assessment, the development would go a long way to  rescue the victim permanently.

While he noted  that sickle cell disease is hereditary from both parents with incompatible blood group  that promotes the disease, he enjoined the youngsters in the country to  always check their blood group and to also get education on who to marry as far as genotype compatibility is concerned.

He also advised  parents to check their babies  genotype against  the sickle cell disease tendency and those who are living with it to learn how to manage it.

He also called on general hospitals in the country to designate a fully funded centre for the sickle cell patients so as to give them an  exclusive health care attention in their hospitals.

Speaking in the same vein, on the occasion, the Director of operations for the foundation Abayomi Odetunde, a medical scientist, stated that SCHAF was established about 10 years ago in Nigeria by Professor Adeyinka Falusi  to address the spread of sickle cell disease  and  to find ways to care for the victims in the society.

According to him, not less than 2,000 patients have benefited from the foundation free services  since inception.

He said the foundation is committed to sickle cell control and management awareness in Nigeria, especially in Oyo State.

He noted that while the foundation would continue to commit itself to shine the light on sickle cell disease in Nigeria, according to  this year’s world Sickle Cell day, he said the foundation would not mind support from philanthropists in the society in cash and in kind.

“Sickle cell challenges are very expensive to manage. The foundation spends Millions   of naira to support people living with sickle cell  disease  in the country,” he said.

Mrs Oyedele Folasade, a Sickle cell patient, one of the beneficiaries of the  foundation, confirmed the free medical support treatment being enjoined by numerous sickle patients in the state from the foundation.

She described  the foundation as a blessing to Nigeria in all ramifications as regard sickle cell challenge issues.


While she enjoined the foundation  not  to relent in its oars in its  bid to wage wars against the spread of the disease and its support for the innocent victims, she appealed to spinsters and bachelors in the society to avoid having children with sickle cell disease by seeking for counsel from experts on genotype compatibility.

JAMB: Exam yet to commence in Warri over technical hitch