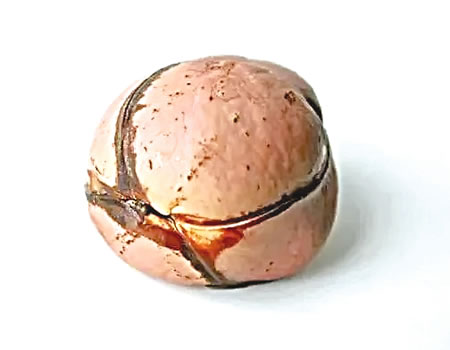 Wonderful kola, also known as miracle seed or memory nut, is extremely popular nowadays thanks to its benefits in treating many health problems.  But much more, daily intake of this nut can protect against stomach ulcer.

In a new study, researchers found that wonderful kola helps to enhance the healing process of stomach ulcer by increasing the platelet count and nitric oxide levels. These are important for the healing of wounds.

Platelets are produced in the bone marrow and released into the blood where they play an important role in blood clotting, helping to stop bleeding when blood vessels are injured. Nitric oxide protects against damage of the wall of the intestines and promotes ulcer healing.

Peptic Ulcer Disease (PUD) affects millions of individuals worldwide and is considered one of the most important common diseases in the world. Although there are drugs currently used in the management of PUD, a number of reported side effects and the high rate of relapse make the search for better products imperative, hence the need for more research into medicinal plants that can protect from ulcer.

For the study, rats were fed with diets containing wonderful kola for seven weeks; thereafter, the ulcer was induced in some of the animals. Different tests were carried out on them, including blood and gastric acid secretion tests over the period.

The researchers recorded a significant decrease in gastric acid secretion by days three and seven in the animals that had a diet that contains wonderful kola compared to those fed the standard laboratory rat chow.

Also, significant increases were observed in blood parameters such as blood platelet count and nitric oxide levels in wonderful kola-fed animals compared with others over the period the test was done.

In Nigeria, it is locally called Uke by the Ibo of South East, Obi-ata or Uwuro by the Yoruba of the South West and Ovu by the Bini tribe. The plant’s fruit, which resembles avocado pear, is yellowish when ripe with a yellow flesh containing a few large, blackish seed. The fruit is edible and tastes peppery. It is either eaten raw or cooked.

Different parts of the plant have folkloric uses. But its seed gave it its common name, wonderful kola, because of its usage in traditional medicine.

For example, in Ghana, the fresh bark of the plant is used for  earache while in Cameroon, the hot water extract of the stern bark is used as an aphrodisiac.

In Nigeria, the seed, when mixed with palm oil is employed in the treatment of malaria, but in Ivory Coast, the decoction of the bark is used to relieve a headache, sinusitis and eye infection.

In Africa, wonderful kola has the ability to stop a migraine headache when applied on the forehead.  The stem bark extract is applied as an enema to treat back pain. The seeds which have a peppery taste are used as a substitute of capsicum pepper.  In Côte d’Ivoire, the seed is chewed as a substitute for kola nuts.

Previously, in 2015 researchers in the journal, Archives of Basic and Applied Medicine showed that its inclusion in the diet reduced acid production in the stomach in a dose-dependent fashion.

The researchers, including Matthew Owonikoko; Salami A.T; Odukanmi A.O and Babafemi Samuel Olaleye, all at the College of Medicine, University of Ibadan. Ibadan looked at the effect of diets containing seeds of wonderful kola in rats with an ulcer.

The results indicate that incorporation of wonderful kola up to 50 per cent increased the rate of gastric ulcer healing in the animals fed these diets when compared with the control rats fed with standard laboratory rat chow 10 days after. This was evidenced by the reduced sizes of ulcerated areas of the stomach in the rats.

It is well known that one of the potent causative factors of gastric ulcer is excessive gastric acid. In order to prevent gastric ulcer, its production must be regulated.

Wonderful kola has been shown to contain chemical substances that are able to protect and promote healing of ulcers, especially flavonoids.

Many flavonoid-containing plants with seeds in the kola group have been shown to possess anti-ulcer activities.  These include bitter kola, Garcinia cambogina and Centella asiatica (Gotu kola).

Also, studies had collaborated its usefulness in the treatment of many conditions like diabetes, hypertension, bacterial infections caused by germs like Staphylococcus aureus, and Klebsiella pneumonia as well as worm infestation.

For instance, its seed extract had been shown to boost the effectiveness of metformin, a standard medicine for diabetes, in lowering blood sugar level.

No more sorrow, no more pain

Why the woman’s breasts sag