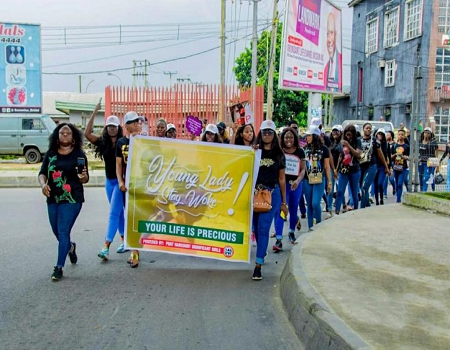 Some women groups led by the Rotary International Port Harcourt South on Wednesday stage a peaceful marched to the Rivers State Government House in Port Harcourt, protesting the killing of young women in hotels in the state.

The women who were in their hundreds wore black attire demanding a security action to end the ugly trend, which is fast gathering momentum.

The peaceful matched started from the NUJ Secretariat at Moscow Road to the office of the Department of State Services to the Rivers State Government house.

At the government house, the ladies presented their petition to the Secretary to the State Government, Tammy Danagogo who received them on behalf of the state government.

Speaking on behalf of the protesters, Rita-Marley Idono. President of the Rotary of Port Harcourt South said women in the state were worried over the killings calling on the state government and security agencies to step up operations to arrest those behind the serial killings and bring them to justice.

She said; ‘We are calling for a thorough, unbiased and shook speedy investigation into the killings; a public apology from the police regarding his statement that all the women killed were prostitutes. Police should render a public apology to women”

Ogoni added; “We are also saying as mandatory, all hotels in the state should have CCTV cameras.

They also stated that everybody, including prostitutes, deserves the right to life and should not be killed in such a gruesome manner.

Addressing the protesters, the SSG assured them that the state government was on the matter and would ensure that it would soon arrest perpetrators warning young girls in the state to be security conscious.

He said they should be on security alert and avoid any meeting that may put them in harm’s way.

“It’s good to have friends, but you don’t without informing people around you. Know who you are going out with, it’s very very important and informs people around you so that if anything happens there will be a reference point”, the SSG advised.

He added; “We want to urge all of is us, please let’s begin to educate ourselves, let’s begin to re-orientate our daughters on the need for vigilance now is more than it has been necessary”

At least, eight young women have been murdered in different hotels in the state within the last two months.