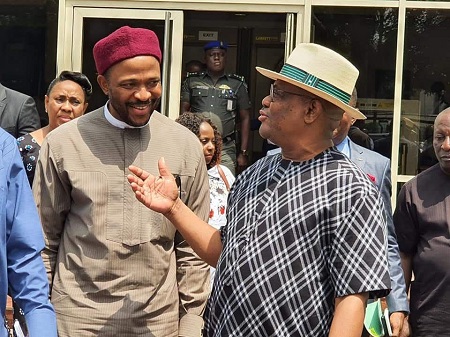 Governor of Rivers State, Nyesom Wike has expressed optimism that he is hopeful that the Federal Government would refund the state resources used to execute federal projects in the state.

He said that his optimism stems from the fact that the Federal Executive Council has sent a verification team to the state in respect of Federal Projects.

The governor spoke on Monday during a courtesy visit by the Minister of State for Education, Hon Chukwuemeka Nwajiuba at the Government House, Port Harcourt.

He said: “I thank the Federal Government for at least coming to verify our claims. We submitted our claims, while some other states have been paid. But we are hopeful.

“We have been submitting several documents on the issue of projects that were executed by the Rivers State Government for the Federal Government.  We believe that by this verification visit, we will get paid”.

He said most of the Federal Projects in question were executed by Dr Peter Odili and the immediate past administration in the state.

He said if the state gets the said funds, they will be channeled towards other developmental projects in the State.

Wike said that the country must move together in unity, because certain issues transcend politics.

Earlier, Minister of State for Education, Hon Chukwuemeka Nwajiuba informed that the team was in the State in respect of the Federal Projects verification exercise approved by the Federal Executive Council.

He said that the team would assess and verify projects that the Rivers State Government completed on behalf of the Federal Government and report back to the Federal Executive Council.

He noted that the Federal Executive Council raised the committee following official demands by the Rivers State Government on Federal Projects executed by the state.

The Minister said that the verification team would work with the Rivers State Government to verify the claims.