by Tribune Online
in Features
Reading Time: 8 mins read
A A 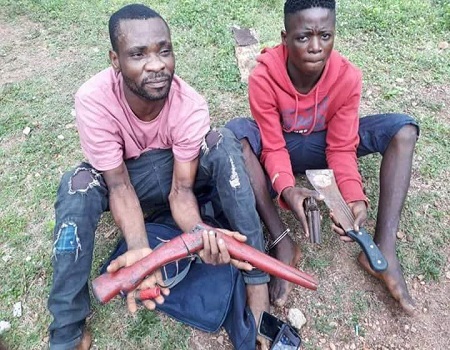 The atmosphere was charged at the Ogun State Police Command on Friday when the Commissioner of Police, Ahmed Iliyasu paraded some suspects involved in various offences such as murder, kidnapping, robbery, burglary, rape and cultism, among others.

The reason for the charged atmosphere was not far to seek; among those paraded were two suspects, Muritala Babatunde and Taiwo Razak, who were accused of killing two students of the Olabisi Onabanjo University, Ago Iwoye on May 28.

The names of the victims were given as Oriade Adebisi (22) and Julian Eke Imaga (18).

Family members of the deceased victims, including their parents and siblings, as well as colleagues thronged the press briefing venue to catch a glimpse of the suspects, while the victims’ parents could not hold back their tears which ran down their cheeks.

The news of the murdered victims had gone viral few days ago after police investigation revealed their killers, and their decomposing remains were located in a bush close to Ijebu Ode-Awa Ijebu-Ibadan road.

The police commissioner had told journalists, Sunday Tribune inclusive, that a relation of the male victim, one Oriade Adeola Rafiu, reported to the police on June 3 that his brother, Adebisi left home since May 28 with his girlfriend, Julian Eke Imaga, in his Honda Crosstour car with registration number FST 350 FA, but had yet to return since then.

Julian was said to be a Diploma student in Law at OOU, while Adebisi was in his third year, studying Computer Science.

Iliyasu said that based on the complaint, the Inspector General of Police’s Intelligence Response Team (IRT), led by their commander, DCP Abba Kyari, in collaboration with Ogun police command embarked on technical intelligence- based investigation which led to the arrest of two suspects – Muritala Babatunde and Taiwo Razak.

He added that investigation revealed that Adebisi was driving his car at about 11 p.m on May 28 after paying his friend, one Akogun, a visit. Three armed men reportedly emerged on a motorcycle as the deceased drove towards Oru junction, and took him and his girlfriend in the car to a nearby bush.

“An iPhone with etisalat SIM card and two pairs of sneakers belonging to Adebisi were recovered from Babtunde. Two of them, who are members of Aiye Confraternity, confessed that they killed Adebisi and his girlfriend after they were taken to a junction at Oru-Ijebu.

In his confession, Babatunde, an indigene of Oru Ijebu in Ijebu North Local Government Area of the state, admitted killing Adebisi and his girlfriend, Julian. He attributed his action to being defrauded by one Adebisi played on him in an internet fraud deal, but said that Julian was killed because she was with her boyfriend and sparing her would mean exposing himself and others who carried out the crime.

Babatunde, who opened up to Sunday Tribune in an interview, narrated how he carried out the alleged criminal act: According to him, “I am a university drop-out, but while in Olabisi Onabanjo University at Ago Iwoye, I was initiated into a cult group called Black Axe Confraternity, popularly known as “Aiye”.

“I was the number one Aiye in Ijebu-North axis before my arrest, and had two locally-made pistols in my possession. My gang members and I normally used the guns to carry out any acts we embarked upon.

“Bisi Oriade was my business partner. We were into internet fraud, popularly known as ‘Yahoo’, and we were together for just a few months. While I belonged to Aiye Confraternity, Adebisi was a member of Buccaneer cult, popularly called Alora. He was the second in command of Alora confraternity at OOU, Ago-Iwoye.

“What made me kill him was because we had a deal together and we made $6,450, which he had access to. The money was over N2 million. Immediately he got the money, he didn’t give me my share. Initially, he said I should send my account number, promising to send my share to me, but he never did. Instead, he started using the money to purchase personal items, including a car.

“It also came to a time when he started threatening me with his cult members, and I couldn’t just sit down and do nothing. He was the first to start threatening me, promising that if I didn’t stop disturbing him, he would take me out of the way.

“It then became a case of who acted fast. So I told my girlfriend to start monitoring his movement for me. On May 28, she gave me the information that he was around Oru-Ijebu junction; I went to where he was with two of my cult members, Rasak Taiwo aka Iku and Sodiq), and we were able to get him.

“When we met him, he was with his girlfriend in the car. We showed him our guns and told him to drive to Awa-Ijebu. We went to an uncompleted building there, where we shot both of them dead.

“Before killing Adebisi, I ordered him to deactivate the password on his iPhone and I took it from him. I also took two pairs of shoes from his car.

“Killing him was not what I wanted to do, but it was a situation of who acted first. He could also have killed me. Adebisi was also giving money to a rival cult group and was not giving me any. He also did not recognise me as the overall cult leader of that area.

“In all honesty, his girlfriend didn’t offend me. It was just unfortunate that she was with her boyfriend when we got him, and in that circumstance, there was no way we could release her unhurt.

“After killing them, we just dumped their bodies somewhere in the bush and took the vehicle, a Honda Crosstour, to a place very close to the police station at Awa-Ijebu and left it there.”

The second suspect, Razak also narrated his involvement thus: “I am from Imota in Ikorodu Local Government Area of Lagos State. I was initiated into Aiye confraternity in 2015. I was staying with Babatunde at Oru-Ijebu who is the number one in our confraternity.

“On May 28, in the late hour of the night, Babatunde called me and one Sodiq to meet with him at Oru junction. When we got there, he told us that he wanted to kill Oriade Adebisi who was holding on to his money.

“Babatunde then called his girlfriend Seun Yetunde, who had been monitoring Adebisi’s movement, and she brought a bag containing two guns and a cutlass. Babatunde gave me one of the guns, held one and gave a cutlass to Sodiq while waiting Adebisi.. Few minutes later, Adebisi and his girlfriend arrived in a car.

“Suddenly, “we based him down (held him down) with guns. Babatunde took over the steering of Adebisi’s car and ordered him and his girlfriend to the backseat. Sodiq and I sat at the back with the lovers and Babatunde drove away from the junction. We took them to the bush along the expressway where they were killed with planks and guns.

“The mother of the female victim, Madam Olanma Offor, who was inconsolable through the press briefing on Friday, said she had yet to believe that her dear daughter was gone. “So, is that how they kill people?” she asked rhetorically.

With puffy eyes and face that had turned red from weeping, the light-complexioned woman, who said she hailed from Abia State, told Sunday Tribune: “Julian was my second child. I was conversant with her. We talked on phone everyday. We would talk in the morning before she would go to school, or in the night.

“But on that particular day, when I couldn’t get her on phone, I felt maybe her battery was flat due to power outage. I became worried, but on the third day, when I couldn’t still reach her, I called some of her friend’s mobile phone lines which she had used in calling me at one time or the other; and I got some information about something happening.

“I dashed down to Ijebu-Ode the following day, where I met her cousin, and got more information. I went to the police and lodged a complaint. From there, I went to the Federal-Special Anti-Robbery Squad, and the Intelligence Response Team (IRT) operatives also got involved until they unravelled what happened to her.

“She shouldn’t have been killed. I had once spoken to the boy, with whom she was killed, and he was such a nice young boy. My daughter had told me she had a friend, and since she was a university student, I couldn’t stop her from having friends.

“I also talked to some of her friends, and one of her cousins, Ebube, who also schools there. So I had spoken to quite a few of her friends. On certain occasions, she would use her friends’ mobile phones to call me, and I would save the number on my phone just in case I would need to reach out to her. I made sure I called her every day, even for just a minute or two. She shouldn’t have been killed.”

The police commissioner said that the decomposing bodies of the victims were recovered on June 19 and deposited at the General Hospital, Ijebu Ode’s morgue for autopsy. He added that the car was also recovered and parked at Awa Division, Ogun State, while their operational guns were equally recovered.

“Iliyasu stated further that investigation into the case would continue as efforts were being made to arrest other accomplices.”

Inside Ekiti communities where businesses, livelihood suffer over lingering one year power outage

11-yr-old girl accuses dad of having sex with her