Why many leaders don’t finish well 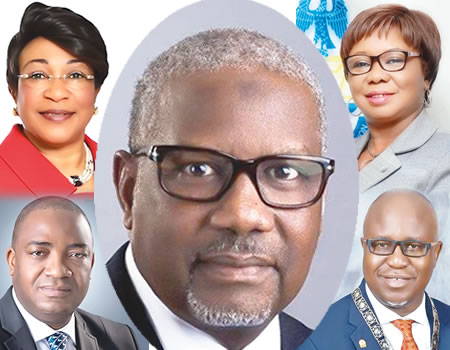 A common saying among soccer pundits is that a coach is only as good as his last game. This is very profound because the implication is that when it matters most, a coach’s past performances may not count, he will be assessed by his most recent outing. As it is in football, so it is in life and leadership. In life, many people start well but end poorly. Similarly, many leaders start their leadership journey on a high note but end on a very low note. Unfortunately, their poor ending vitiates whatever good record they might have made along the journey. So, it is important that leaders should continue as they want to end so as not to end up on the wrong side of history.

No leader ever sets out with the intention of ending poorly. Every leader starts with the aim of effecting a positive change and earning an enviable position in history. That is why when a new leader assumes office, he puts in place certain measures which show that a new person is in charge. But along the line, things happen and the leader abandons his earlier intention for other things. That is why it is said that the road to hell is paved with good intentions. So, starting with a good intention is insufficient to ensure a good end. The intention must be turned into positive actions which must be sustained throughout the leadership journey. Unless that is done, the leader will end up where he never envisaged.

How leaders can end well

For a leader to end well he has to do the following.

Most leaders begin a slide when they believe they have achieved enough and there is nothing new for them to accomplish. Once they get to this point, they develop a ‘settlement’ mentality, a mindset that makes them to want to relax and take things in their stride. Once a leader gets to this level, he plateaus; he is unable to reenact his past feats let alone surpass them. This mentality robs him of energy, deprives him of his drive, takes away his passion, blocks him from fresh thinking and denies him of new ideas. At this point, lethargy hits him where it hurts the most before degeneration sets in. He becomes a shadow of himself and people begin to wonder what happened to him.

Many leaders who fall into this trap do so because they believe they have accomplished their original goals. Even after accomplishing set goals, a leader should not retire because the end of a road is the beginning of another. The end of a vision sets the stage for a new one. For as long as a leader has breath in his nostrils and strength in his bones, he is supposed to keep on. If he keeps at what he is doing he continues to add value and for as long as he keeps adding value, he will end on a strong note.

Allied to ‘settlement’ mentality is loss of focus. A leader with ‘settlement’ mentality loses the drive to do more, while a leader with loss of focus has his drive but he is channeling his energy in the wrong direction. He has abandoned the substance and is on the trail of shadows. Every successful leader comes into office with specific goals to be accomplished. He sleeps and wakes up thinking about these. The desire to accomplish those things keeps him going; he disregards obstacles, he plays down on problems just to have his mission accomplished. But when a leader loses focus, he derails. He is no longer motivated by the important but rather he is excited by the mundane and the trivial. When a leader loses focus, he thinks more about himself than he does about the organization. When a leader loses focus, he is more interested in his own well being and reputation than he does about those of the organization or the people that work with him. When that happens, he can no longer give his best to the organization. His contribution declines, his influence wanes and he ends on the wrong side of history.

A leader must endeavour to put in focus what is important. Every leader is appointed or elected to discharge specific functions; losing sight of those will make him an accident of history.

Chief Festus Odimegwu will qualify as one of the most brilliant minds that ever passed through the Nigerian Breweries Plc. He shone like a thousand stars and his rise within the system was rapid. With a first class degree in Chemistry from the University of Nigeria, Nsukka, he was employed as a Shift Assistant in 1980, became Shift Brewer in charge of Bottling in 1982, was promoted Brewer in 1984, Technological Controller in 1985 and Production Manager in 1987. In 1988, he was at Heriot Watt University, Edinburgh for a master’s degree programme and returned to the company as Brewer/Senior Technical Manager in 1989. He was promoted Sales Director in 1992 and became Food Coordination, AMEG Unilever, London, in 1993. He was appointed Marketing Director, Lever Brothers Ghana in 1995 and Managing Director/CEO, Nigerian Breweries Plc in 1997. He held that position till 2006.

As an outstanding business leader, Odimegwu was the driving force behind the building of one of the world’s most advanced breweries in Ama, Enugu State. So well did Nigerian Breweries perform under his leadership that the company won the Heineken Gold Africa Beer Award five times.

But Odimegwu lost his focus, dabbled in politics and became a campaigner for former President Olusegun Obasanjo’s third term agenda.

Odimegwu, in his bid to sell the third term agenda to the business community, described the former president as “a businessman’s dream.” He also said “His politics is good for my country, good for my shareholders and good for my customers. He needs to be given a chance to complete the good work he is doing.”

However, Odimegwu’s involvement in politics neither went down well with the shareholders nor the board of the company. In 2006, he was forced to embark on a Senior Executive Development Programme in the United States of America after which he was to be assigned a new role within the Heineken company. Odimegwu knew it was a euphemism for being sacked and he opted to resign his appointment, thus becoming a victim of his loss of focus.

Every leader must understand the times in which he operates. Many leaders who end up poorly do so because of their failure to correctly interpret the times. Times change; what worked at a time will not work at all times. People also change, what people craved once will not always be their pursuit. Sustaining leadership tempo requires understanding this. Leaders who do not understand this are left behind by the changing times and are confined to the realm of irrelevance.

Between 1940 and 1945 Winston Churchill was probably the most popular British prime minister of all time. In May 1945 his approval rating in the opinion polls, which had never fallen below 78 per cent, stood at 83 per cent. According to the BBC, with few exceptions, politicians and commentators confidently predicted that he would lead the Conservatives to victory at the forthcoming general elections.

However, Churchill and his party were roundly defeated in the 1945 elections. The reason for this is that the qualities that had made him a great leader in war times were not what he needed at peacetime but he did not realize this.

As prime minister in 1940, he invited the leaders of the Labour, Liberal and Conservative parties – Attlee, Sinclair and Chamberlain – to serve in a Coalition Government, that was the administration which mobilised the British for total war.

The conduct of the war, however, became his overriding passion, and military victory was by far the most important of his goals. Thus everything else, including party politics and people’s well being, was shoved to the background. As a result, when the war came to an end and party politics resumed, Churchill continued to carry on as a war time leader. Eventually, he found himself without a clear sense of purpose or direction.

As great a leader as Churchill was, he was unable to appropriately interpret the times and the requirements of the times. Consequently, he was swept out of office by this seemingly insignificant weakness. Although still regarded as one of the best leaders the United Kingdom has ever witnessed, Churchill left office on a low point.

Sometimes because of the accolades generously showered on them by those who mill around them, leaders are unwilling to admit it when they go wrong. The praises make them carry on with an air of infallibility. When a leader sees himself as infallible, he makes it difficult for those who wish to genuinely help him to do so. More often than not, these people join the coterie of praise singers rather being seen as naysayers or at best avoid him. But when a leader does not have anyone who can speak truth to him, he is set on a path whose end is destruction. If there is no one who can tell a leader that he is wrong when he goes off target, then he is most likely to end up on the wrong side of history.

To end well, not only must a leader admit it when he is wrong, he must also encourage people to speak out when they see him tread a wrong path.

Not surrendering to adversity

There is nothing so good that it cannot go wrong. The best plans fail, the best projects go wrong, the best hands disappoint. Disasters happen when least expected. These are facts of life. A leader must come to the realization that things will not always work out according to plan. When a plan or a project fails, a leader must not interpret this as his personal failure but must take it as an opportunity to learn the necessary lessons and start again in a better way.

On December 9, 1914, a fire destroyed over half the buildings in Thomas Edison’s West Orange Laboratory after an explosion in the film inspection building. The damage done to the laboratory was valued at over $7million. Edison was not at the laboratory when it happened but he rushed down as soon as he was told of the incident.

Seeing what was happening, rather than surrendering to adversity or bursting into tears, he said “Although I am over 67 years old, I‘ll start all over again tomorrow.”

And he did. The following day, he started rebuilding the laboratory without firing any of the 250 persons on the staff. While the laboratory was being rebuilt, Edison finalized the design of a portable searchlight whose three million candlepower beam would be visible for miles. He got the inspiration while his laboratory was engulfed in flames. According to him, he had noticed how the firefighters were hampered by the loss of power and light while trying to put out the fire. So, he pondered over it and came up with the battery-driven light source idea and design.

Edison never allowed adversity to stop him from achieving his goals. Therefore, he ended well. Leaders who do not submit to adversity always end well.

Ending well is not a given, it is a work that must be done every day.

Why is it that Africans never plan for the future?