Politics
By YEJIDE GBENGA-OGUNDARE On Oct 5, 2018 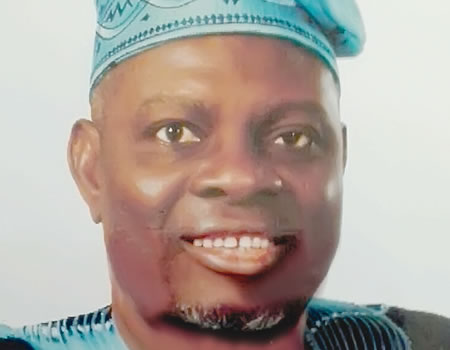 Chief Adebayo Adetunji popularly known as Adetunji Onisiga, is a prominent Ibadan man who made a name as one of the foremost businessmen in the history of Ibadan. In this interview with YEJIDE GBENGA-OGUNDARE, he speaks on his foray into business, how he set up Trans International Bank and its collapse, struggles in estate management and how he got the name Adetunji Onisiga.

I am an Ibadan man; my lineage is Ibadan. My father is from the Olugbode family while my mother is from the renowned Ibikunle family; these are two prominent families in Ibadan. I grew up at Orita Merin, the centre of Ibadan. I was born a Muslim and raised by the Catholic, so I was a mission boy. From there, I moved; I attended Ibadan Boys High School and some other schools. And after school, I began my career at the secretariat as a clerk with the treasury and it is from there I grew and left to work in other places like Costain West African, the University College Hospital as a junior clerk.

How did you venture into cigarette selling?

From UCH, I joined the Nigerian Tobacco Company around 1952 and I started there as a bicycle sales boy after which I was promoted to the post of a sales canvasser, this took me to the level of the middle class in the company, I wasn’t on management level but on this level, I was opportune to work with the white men who were the managers and most of them loved me because I was dedicated and never took no for an answer. In 1962, there was opportunity to move to the management level, so I sat for a promotion test, but one of my bosses who was a top management staff was on the panel, his name was Harry Paul and I remember that he said what would I ask this man, don’t worry him; he was an all round professional that would be good everywhere and can stand on his own. And he told me that they wanted to appoint me as a distributor for Ibadan; I was bewildered, where would I get the money? But he told me not to worry that we should talk about the modalities and that they would give me a loan to start; two different loans, one was interest free while the second had interest but the interest was one quarter of what it should have been if I took the loan from the bank. So I commenced, before then, I had sold cigarettes in Ibadan and environs; Akanran, Lalupon and suburbs, on bicycle. And that was how I became a distributor for Nigerian Tobacco Company.

That’s where the name came from?

Yes, I was known as Adebayo Adetunji, distributor of Nigerian Tobacco. I became number three in Ibadan as it was divided into zones, Ijebu, Oja Oba. What they did was, they carved from Beere down to the villages; Ijebu woman, Mrs Ogunsanya was given Agbeni to Oke-Ado and the third person, a man named Ayo Lawrence was given Ekotedo and so on but when the lady sold 20 and the other man sold 10 packs, I would not sell more than two packs. That is where I used my brain; I had to develop my zone and I always thank God for giving me that initiative. One day, I went to Beere roundabout and discovered that all the people that were selling in Agbeni and Dugbe are living in the city and they were buying  their cigarette where they do their business and bringing it home and until the other distributors finish selling their cigarette before  I could sell, so I used my brain and took what they are selling to them in their homes so they take it from home, that’s how I got the upper hand and from number three, I became number one distributor, It was reported that I took their customers, so the expatriates,  followed me one day to find out how I was doing my business.  They were impressed and my rating increased from the house to house sales. That was how I became known as Adebisi Onisiga and I never left the interiors. I am very proud of that action of mine.

What were your achievements?

I did so many things. Well, the greatest one is that I became the founder of a bank in Nigeria; that is the Trans International Bank but what happened to TIB is that I asked the government to partner with me during time of  a particular governor of the old Oyo State. I was warned but I didn’t listen because I thought I would escape it, I known him from the days of my cigarette selling, I had a point near their school in Ikire while he was a student. But I made landmark achievements during this time; I purchased the old Kingsway store and the shopping complex behind it and I expanded from there.

So you have always been into real estate?

Yes. I am a real estate businessman and I work hard at this

Is real estate an easy venture?

There are always issues in management of property. And when they come, we face it. One thing I believe in is God and because of that I can face any hurdle. But no problem can be as big as the effect of the collapse of Trans International Bank because I lost millions in the crash of that bank. I lost more than money, I lost properties. I was the first individual in Ibadan to build 83 houses at once.

How did you manage that feat and where is it?

It is here in Ibadan. It is Abake Estate; that is where you have the Air Force barracks in Akobo today. It is now called NAF Base.

How did it get to the Air force?

I will answer that because that is a question no one has ever asked. When the TIB crashed, I became penniless as I had the largest shares in TIB as leader of the consortium; I was owing the cooperative bank at that period. The trouble was becoming too much and depression was setting in from my financial predicament. I had completed my housing estate then, I built it because the Federal Government had said that if you built 50 houses together, government would put all basic infrastructures, but when I did my own, they didn’t fulfill the promise so I had to sort it myself. I borrowed from friends. I needed to pay off my debts especially the bank. I am a conscientious person so I wasn’t comfortable with the debts, I brought in Leyland to take over the estate but the government that brought them in refused to patronize them so unfortunately for me, they couldn’t take the estate. I now had 83 houses, what will I do? I started looking for a buyer and with the help of a younger friend, Bayo Alogba, a retired police commissioner, I was linked up with a top Air Force officer who we tried to convince to put a barracks in Ibadan since there was a ready structure, that is how that came about it. We estimated Abake Estate to be N17.5m at that time and after we convinced the Federal Government to put an Air force barracks in Ibadan, they said they couldn’t pay more than N6.5m, I sold it, I didn’t have a choice because I needed to pay debts but I made a vow to God that if I overcame the problems and bounced back, I would refund the N6.5m which the airport paid and I did.

I did not sell it. I donated 83 houses with the land to the Air Force. Their commandant used to come and see me. Many people don’t know but it is in my autobiography which also has a copy of the cheque I gave to pay back. The book was titled Struggle to success because I really struggled

Are you the one still managing your many properties?

Yes, with the help of two of my children who are lawyers, they have all it takes to manage it with me and they deal with the details.

How do you manage your numerous tenants, any challenges?

Well, it is a Herculean task; we have some recalcitrant tenants who frustrate you with litigation just because they know the case goes on for long and because often the tenancy law works more for tenants than landlords. The court is the hope of everyone but when you go to court, people tend to frustrate you. For example, imagine my plight from the time of TIB which I set up; part of setting up was that I built houses and rent them out to them at N100, 000 annually because as a bank with headquarters in Ibadan, there were trainings for staff and we needed about seven million naira for their accommodation but with the house, we saved cost. They appreciated and used it until the terrible storm that pushed us down. Enterprise Bank came after that followed by Spring Bank and they still used the building until Heritage Bank took over and we started having issues on the property, especially on the one at Agbowo and Iwo road, they treat me how they like because I am no more there and I have faded out. They moved out at Agbowo six years ago but they haven’t handed the key over to me, the place is deteriorating, it is not being used, rent is not being paid and they didn’t give me my keys, same for Iwo road which they left last year. I took them to court but their lawyer is always giving excuses to be absent from court. I am not asking for too much; they should give back my property before it finally crumbles for lack of care.

It’s time to liberate yourself and vote out APC, Atiku tells Lagos residents

PVC collection: Why North stands ahead of others in 2023 election

You have no reason to vote for APC, Atiku tells people with disabilities