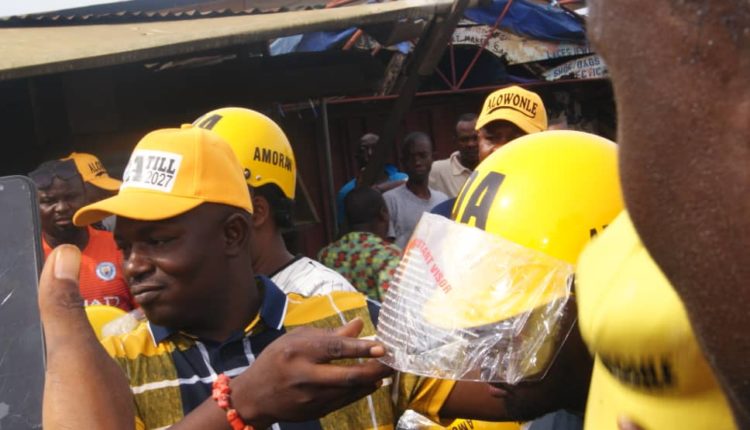 In a bid to personally contribute his little quota to the safety and welfare of the commercial motorcycle riders in Remoland and Ogun state generally, the incoming chairman of Almagamated Motorcycle Owners and Riders Association of Nigeria (AMORAN), Ogun State Chapter, Otunba Aina Nurudeen, popularly known as Alowonle, has distributed free helmets to commercial motorcycle riders in Remoland.

Alowonle did this in Sagamu, yesterday, Saturday during this year’s edition of Sagamu Day Celebration.  The event was colourful as commercial motorcycle riders who attended the event to benefit from the free distribution, conducted themselves in a very organized and orderly manner.

Speaking at the occasion, the Sagamu-born transportation chieftain disclosed that, he was motivated to distribute the helmets freely to his colleagues because of the dangers involved in their profession.  According to him, he rode motorcycles for commercial purpose for five years before he eventually became a chieftain in the association. He noted that motorcycle riding is full of dangers that require some safety measures to safeguard lives in case of accidents. Parts of the safety measures are the helmets freely distributed by him to his colleagues in Remoland.

“I am doing this because I know I have a great responsibility as a leader to look after the safety and welfare of my colleagues. Apart from being a leader now, I was once like my colleagues here now. I rode a motorcycle for commercial purpose for five years before God elevated me. I know that our profession has its own shares of risks, just like other professions.

“The major danger in our profession is the accident. You will agree with me that, if an accident occurs, the first part of the body that will be badly affected is the head and which can lead to death or brain injury. It is to prevent such life-threatening injuries that I bought these helmets with my personal money and distributed them to our people. This is my own little way of contributing to their safety and well being. It is also my own little way to support the government of Ogun state under the leadership of His Excellency, Dr Dapo Abiodun, to achieve their core mandates to the people of Ogun State”, he said.

Also speaking, one of the beneficiaries of the free helmets, Bashiru Ayinla sincerely thanked Otunba Alowonle for his kind gesture towards his members, describing him as a rare leader who has the interest of his people at heart. Bashiru disclosed that many motorcycle riders in Sagamu have struggled to buy the helmets but to no avail because of lack of fund. He, however, said the free provision of the helmets by Otunba Alowonle to them, has helped greatly.

Nothern elder advises Igbo on how to clinch Presidency in 2023