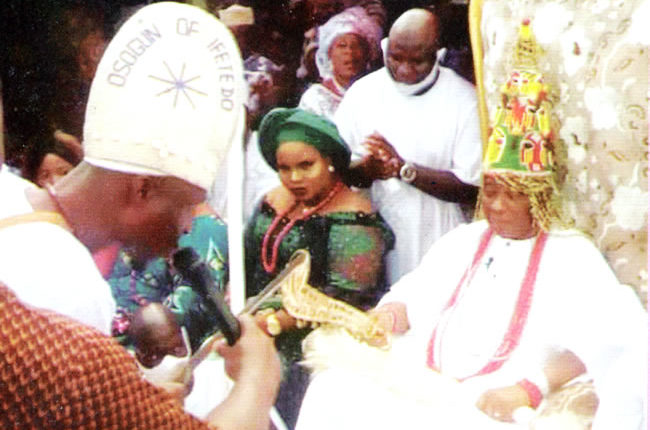 From His Imperial Majesty, Oba Adeyeye Enitan Ogunwusi, Ojaja 2 to other prominent traditional rulers, the occasion was remarkable in many respects. In their conviction, beyond the facade of culture and tradition symbolised by the festival were the inherent huge economic potentials.. Oba Akinrera put this into a sharper perspective in his brief remarks at the festival, when in a brief opening remark, he underscored how the immense opportunities in culture could be turned into wealth via tourism. According to him, at the moment, United States, Latin America, United Kingdom and Canada are taking advantage of the huge cultural heritage of the Yoruba ethnic nationality to attract tourists through high profile regular cultural celebrations of the Yoruba nation.

A few of those intrinsic values in traditional Yoruba culture and custom were thus on display at the Olojo festival Troupes, bata drummers, dancers, acrobats, Ijala worshippers all in customary costumes, were at their best, keeping guests spellbound for hours with awesome chants and dexterity.

Resplendent in sparkling white, Oba Akinrera later led thousands of people to the Ogun shine at the centre of the community for the customary rites and sacrifices at the shrine, defying a heavy downpour which many ascribed to as a good omen of better days ahead for the community, citizens and the participants and their families. Colourful banners adorned the streets and walk ways, just as members of different age groups, professional bodies and artisans, in uniform attires reflecting their affiliations, joined in the massive moment to the site.

In the meantime,  the palace brimmed with the high and the low in the society as the iconic fuji music ambassador, Rasheed Osupa dished out pulsating melodies to the delight of the guests and other participants, including tourists from across the world. An elated chairman, Organising Committee of the 2021 Olojo festival, Chief Rasheed Alani Adedapo, in his speech was effusive about the full support from the Kabiyesi, community and his team for the overall success of the event, which he said was another leap in the promotion, sustenance and historical heritage of the Yoruba ethnic nationality. The president of Ifetedo Progressive Union (IPU), Alhaji Musedik Gbenga Ojuade lent credence to the submission of other major speakers on the essence of the festival: cultural reawakening, revolution and revival in the land;  unleashing the huge economic potentials of the Yoruba on the nation.

It should be noted that the celebration, which began  the precious day, dovetailed into other major events lined up for Saturday at the palace till dusk, as many members of groups and eminent citizens trooped to the palace to pay traditional homages to Oba Akinrera, who has promised to sustain the tempo of the annual cultural event. But he is deeply worried by the state of infrastructure in his domain, calling for more proactive collaborative measures from President Muhammadu Buhari and other political leaders. Nonetheless, the monarch lauded effort of the state governor, Mr Gboyega Oyetola in fighting insecurity in the state. “The government of Osun State is trying its possible best in curbing insecurity in our area because the inauguration of the security outfit, Amotekun  has really helped the state government to prevent the influx of kidnappers, bandits and other evil perpetrators from invading the state.» He described the governor’s action in this direction as commendable and outstanding, urging the governor to maintain the tempo. On the involvement of traditional ruler in tackling the insecurities in the country, Oba Akinrera said the traditional institution should be empowered as it has a greater role to play. According to him, “Insecurity is a general problem we have and I think that traditional rulers can be of tremendous help if traditional institutions are empowered. Curbing insecurity, in any human society, there is a need for intelligence gathering; the layman language for intelligence is information. For you to get information, some people have to work for it. As a traditional ruler, you are not the one that will work for information but the people in your domain. Traditional rulers live with their people, know the boundaries of the community and other vital information get to us. Giving us a constitutional role will curb insecurity in any given society.”

Oba Akinrera was particularly concerned about the problems confronting his people and indeed his entire domain: “Our roads are terribly bad, especially from the Ife-end to Ifetedo; even the township roads are very bad. I want to seize this opportunity to appeal to the governor to expedite action in rehabilitating the (Ife-Ifetedo) road. We are made to understand that some portion of the road will be rehabilitated by the Federal Road Maintenance Agency (FERMA) but what we saw was that a very small fraction of it was rehabilitated and they left the larger part and the hardship is much on us.”

On the rate of unemployment and joblessness across the country, the monarch charged the Federal Government to provide jobs for the youth, as such intervention “will make them fully engaged and discourage them from indulging in unholy acts that can threaten the corporate existence of the country”. On the Olojo festival, he described the activities as a must for indigenes of the town to celebrate, Ogun, the god of iron, adding:  «Ogun is the god that paves the way for other idols during the creation of the world and as a result of that, we celebrate him across Ile-Ife land.»